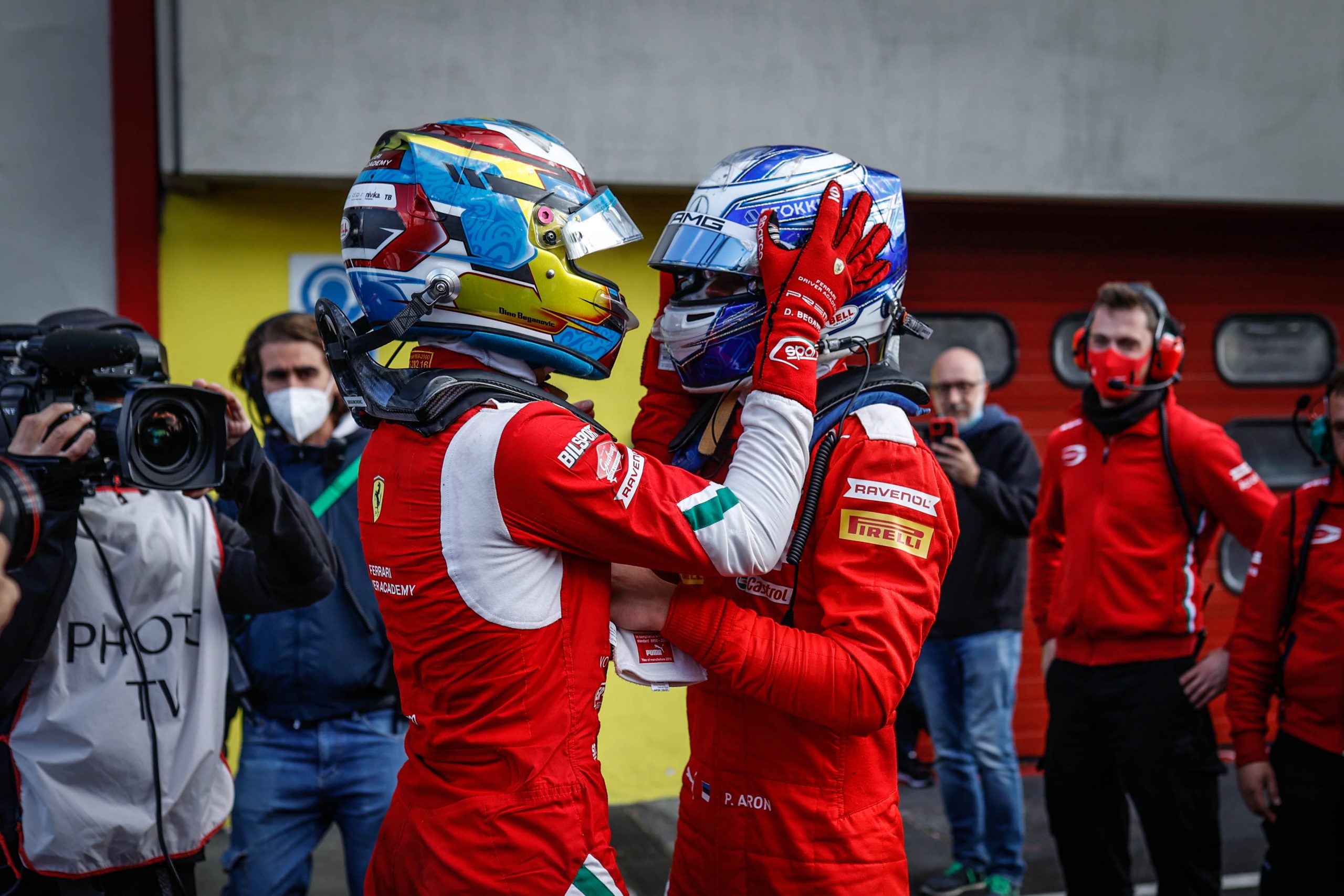 At the start of race 2 at Mugello Circuit it is Paul Aron (Prema Powerteam) to be in pole position, in front of the championship title winner Grègoire Saucy (ART Grand Prix), who manages finally to be back in the very first positions in qualifying. The third is Dino Beganovic (Prema Powerteam), the Rookie that in Mugello shows his great talent, also thanks to his team having found the right key for the best performance of the car. Fourth is Franco Colapinto (MP Motorsport), amazingly fast in the last part of the season. Fifth is Michael Belov (G4 Racing), not as good as expected in QP2,  probably not having found the perfect setup. Sixth is a very good Kas Havenkort (MP Motorsport), growing along the year and also, as his Argentinian teammate, having found great performance in the second part of the season. Seventh is Pietro Delli Guanti (Monolite Racing), really strong on his home track. Eighth is Hadrien David, the fastest of the R-ace GP drivers, the team not really having found the right pace on the Mugello Circuit. Ninth is Mari Boya (Van Amersfoort Racing), who lost his best lap in QP2 due to having passed the finish line after the red flag. The tenth is Gabriel Bortoleto (FA Racing), the Rookie that in the last races is actually obtaining very interesting results. 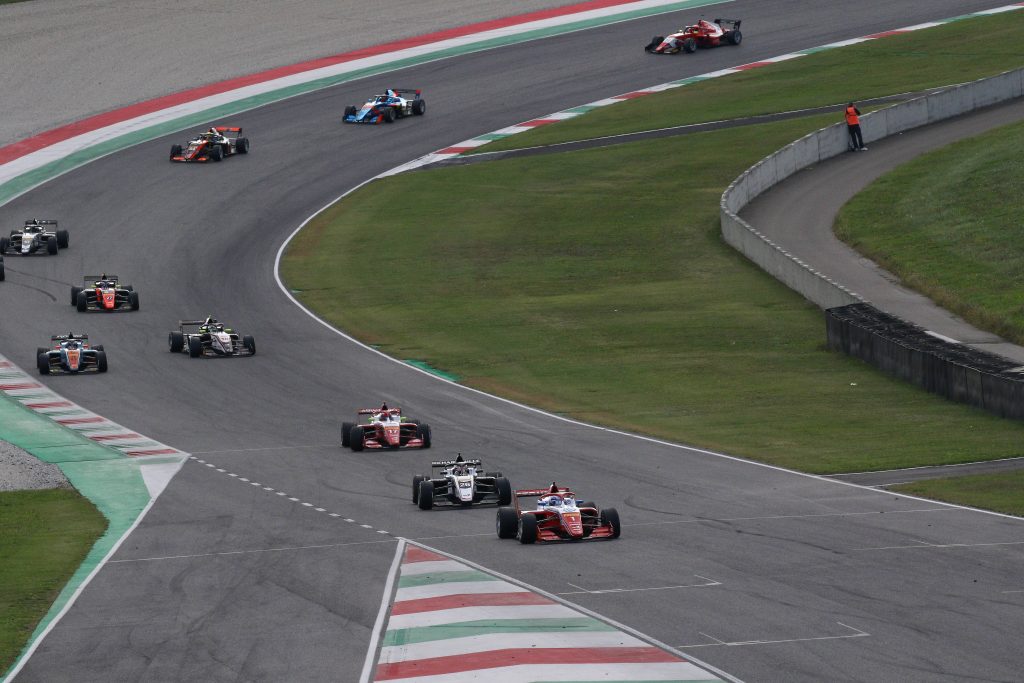 At the start, Aron is not particularly fast and Saucy manages to come side by side with the Estonian driver, and almost overtake him, but finally Aron is strong in keeping the position in turn one, and actually, it is Beganovic to take advantage of the battle and gain the second position on the Swiss driver, who is attacked also by Belov, but manages to resist in third position.

Behind the first four are Colapinto, Havenkort, Delli Guanti, Bortoleto, David and Petecof. After a few laps, Bortoleto makes a perfect overtake on Delli Guanti, who is a bit in trouble in the race pace. Behind, a great battle is taking place between Minì and Maloney, the latter trying to conquer the 13th position. Some more laps and also David manages to overtake Delli Guanti who has lost the speed he had found during QP2. 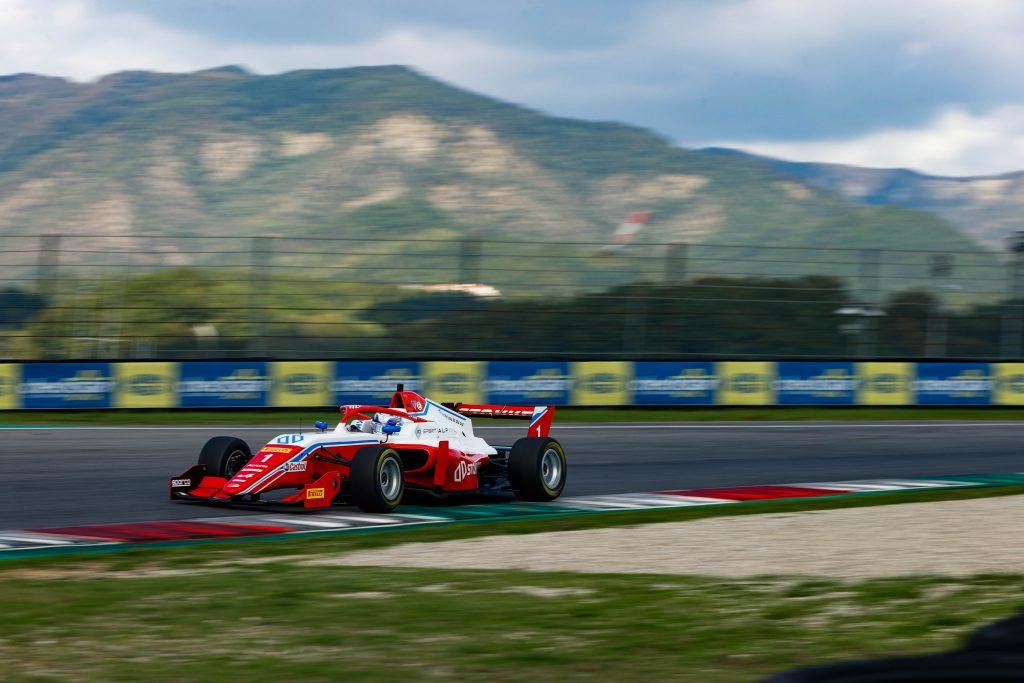 Aron continues to lead quite easily, while behind the time difference from the head of the race is 0.930 for Beganovic, 1.500 Saucy, 2.350 for Belov.

19′ plus one lap to the end of the race Belov attacks Saucy from very close, but actually loses control of the front of the car due to the understeer generated by the car ahead and goes very wide off track, though well managing to control his car, but losing time.

Also Delli Guanti, still struggling to defend his position, goes wide and Petecof, just behind, follows him in the same mistake. Alex Quinn (Arden Motorsport), in the eleventh position, gets closer to the two drivers ahead.

17.30 to the end of the race, David attacks and overtakes Bortoleto gaining the 7th position. In the positions at the back, a very nice move by Eduardo Barrichello (JD Motorsport) permits the Brazilian Rookie driver to overtake Emidio Pesce (DR Formula) for the 26th position.

Gabriele Minì (ART Grand Prix) suffers heavily in the 16th position and is pressed from behind by David Vidales (Prema Powerteam), William Alatalo (Arden Motorsport), Francesco Pizzi (Van Amersfoort Racing) and Andrea Rosso (FA Racing).  With a great move, Vidales passes and conquers the 16th position, while Minì for a moment manages to keep the rest of the group behind, but he will have to retire later on for damage to his car.

11.50 to the end of the race Belov goes wide again trying to attack and overtake Saucy, probably due to the tyres suffering in the last part of the race, and once more for the understeer generated by the turbulence of the car of the Swiss driver.

A few minutes to the end of the race Ido Cohen (JD Motorsport) goes off track and the Safety Car enters. At the restart Aron is once more perfect and maintains the lead, also gaining distance. Behind Beganovic is good in not losing too much, while Saucy has a bad restart and is attacked by Belov, while David manages to move up to the 6th position.

In the final moments of the race, Belov manages to overtake Saucy, but a red flag due to the accident of Jasin Ferati (KIC Motorsport) stops the race and positions are calculated excluding the last lap, so finally Saucy will be third and Belov fourth.

The battle for the second position in the championship is still very open with 50 points to be assigned in the last round in Monza on the 30 and 31 October, with Aron, David, Maloney, Colapinto and Hadjar still mathematically in the battle.

The Rookie trophy sees Hadjar in front of Minì for the final battle, while in the teams standing ART Grand Prix, R-ace GP and Prema Powerteam, though further behind, still can make the title theirs.