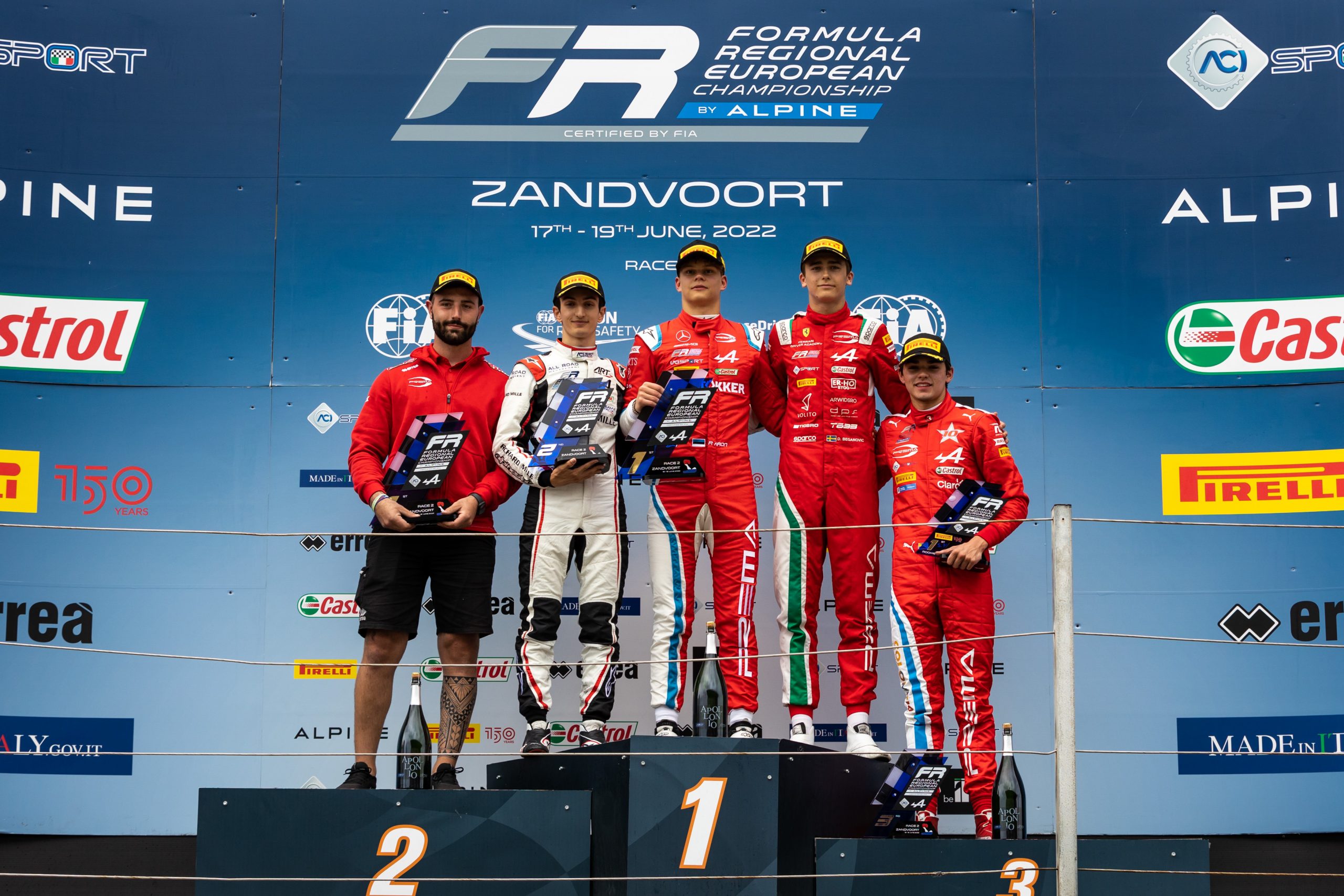 The Formula Regional European Championship by Alpine was back on track today in the fascinating setting of the circuit of Zandvoort, where the international series reached the season’s halfway point.

Paul Aron celebrated his second consecutive victory, coming out of the Dutch circuit with two pole positions and two gold medals. The driver for Prema Racing team showed a blistering pace that allowed him to take his fourth win of the season in Race 2, where he also set the fastest lap. Behind the Estonian driver, Gabriele Minì (ART Grand Prix) finished the race in second place. After starting from the fifth slot of the grid, the Italian driver immediately gained two positions, moving up to third behind Dino Beganovic (Prema Racing), with whom he engaged in a thrilling duel for the place of honor. The Swedish man was passed by Minì, author of a great overtaking move in the final stages of the race, and ended the race on the third step of the podium.

Behind them was rookie Sebastian Montoya, at the wheel of another car of the Prema team. The Colombian driver, who was in contention for the overall podium during much of the race, preceded the other rookie Leonardo Fornaroli. The Italian driver of the Trident Motorsport team tried on several occasions to undermine the leader of the young motorsport drivers’ group, but in the end he had to settle for fifth place overall.

Also doing well was Michael Belov, who made a fine comeback from ninth to sixth position at the end of a race full of twists and turns. Behind the driver for MP Motorsport was Hadrien David (R-ace GP), who finished seventh. Gabriel Bortoleto (R-ace GP) was the protagonist of an exciting fight with Maceo Capietto (Monolite Racing), in which the Brazilian driver got the better of it and finished eighth. Completing the top 10 was Van Amersfoort Racing‘s standard bearer Joshua Dufek.

A red flag was shown at the start of the race when Pietro Delli Guanti‘s (RPM) car went off the track and ended up over the barriers following a collision with Esteban Masson (FA Racing), luckily without any consequences on both drivers’ health.

“It was a great race,” Minì said, “I managed to make a very good start where I passed two drivers at the first corner. After the race was stopped, I tried to put as much pressure as possible on Dino, waiting for the right moment to use the push to pass, which allowed me to pass him. I also had to manage the tyres, especially in the final stages, but it is a great satisfaction to have started from fifth position and have ended up celebrating here on the podium.”

“This is definitely another important result,” Beganovic said. “The weekend was quite difficult for me, as I did not have my usual feeling with the car, but a fourth and a third place definitely mean important points if one thinks about the championship.”

The Formula Regional European Championship by Alpine will be back on track in three weeks, at the Hungaroring circuit on the weekend of 8-10 July.