Paul Aron takes his fifth win of the season in Barcelona 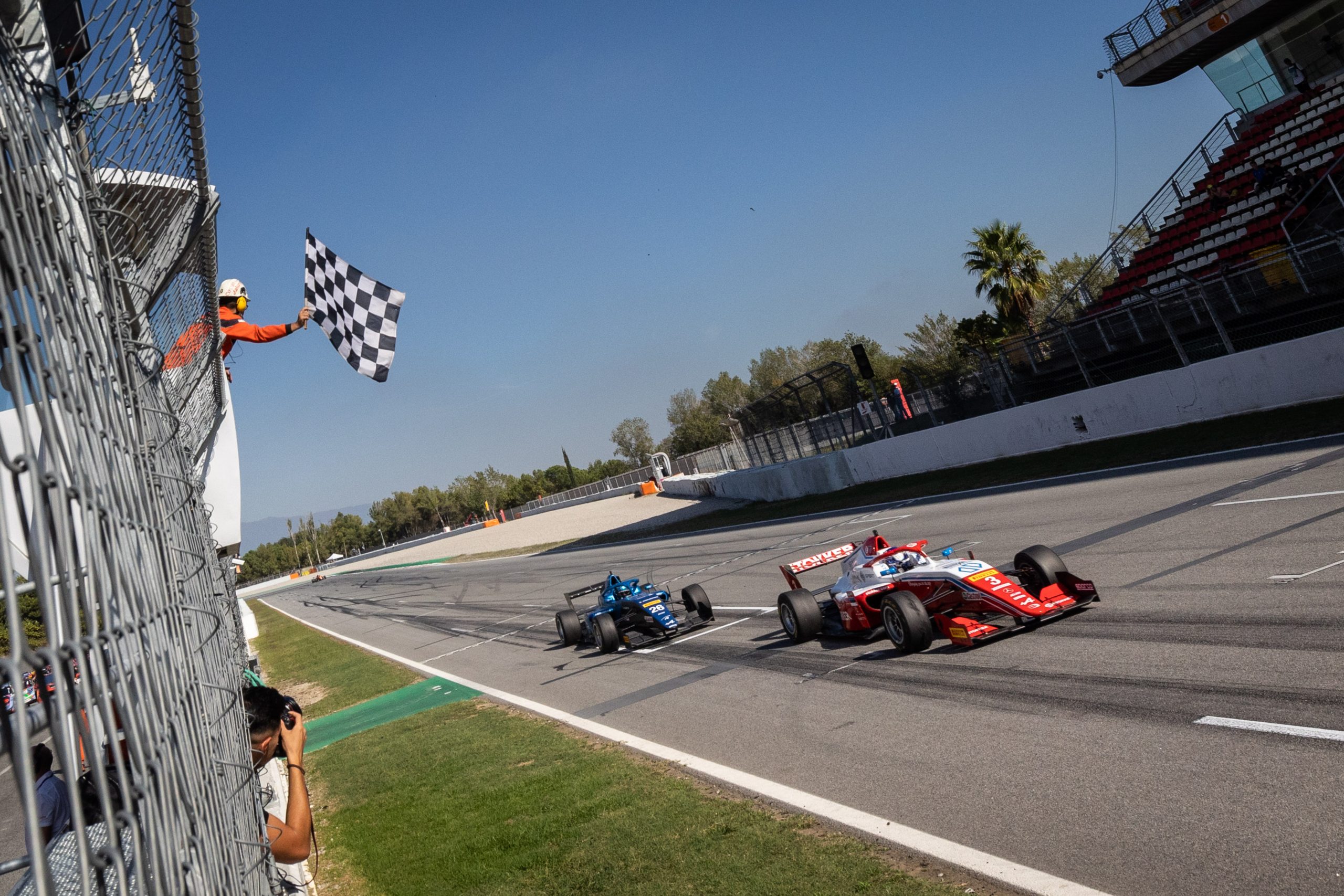 Paul Aron‘s victory was won by keeping the lead from start to finish. After signing the pole position this morning, he climbed on the top step of the podium for the fifth time this year at the wheel of  Prema Racing team’s car number 3.

In Barcelona, the Estonian won the first race of the penultimate round of the season of the Formula Regional European Championship by Alpine, which saw Hadrien David (R-ace GP) taking the second place. The French driver, good at moving up the ladder after starting from fifth place, deployed a perfect strategy that brought him into the leader’s mirrors at the finish line, where they arrived with a just-over-a-tenth gap.

First points of the season also for Dilano Van’t Hoff, author of an excellent qualifying that allowed him to start from the front row next to Aron. MP Motorsport‘s standard bearer put in all his determination, being thus able to face the numerous duels that took place behind him. These included Kas Haverkort‘s (Van Amersfoort Racing) excellent performance: he was protagonist of a fine comeback lap after lap, climbing from ninth place on the grid to end the hostilities close to the podium in the final stages. The same was done by Gabriele Minì (ART Grand Prix), thirteenth at the light in which he was the protagonist of an excellent start, immediately moving into the top 10. A move that relaunched the race for the Sicilian driver (5th), who remains in the game for the title along with Aron, since championship leader Dino Beganovic (Prema Racing) gained no points with the 11th position.

Eduardo Barrichello (Arden Motorsport) did well as well, who after the podium at Spa has definitely changed pace, always earning points in the following races. In today’s race the Brazilian driver, after battling for the podium for good part of the race, finished sixth ahead of compatriot Gabriel Bortoleto (R-ace GP) given the penalty imposed on the best rookie of the day Joshua Dufek (Van Amersfoort Racing) who lost one position for not respecting the track limits.

“After some bad luck I’m really happy to be back at winning,” Aron said, “We started with the right pace dominating qualifying, but in the race it wasn’t easy. I managed the lead the best I could, but tomorrow we will have to work hard to improve our race pace seeing how David came up in the final. I think we have all the tools to repeat today’s performance.”

“Today’s race was great,” said David, “I was able to get a good start by moving up from the third row to fourth place on the first lap. I managed the tires at the beginning of the race until I was given the signal over the radio to push and so I did. I was able to pass Eduardo and then Dilano until I got behind Paul. I feel a slight disappointment because I think we had the potential to be able to win, but Paul was really fast today.”

“Finally a good result has come this year,” said Van’t Hoff, “After the injury it’s nice to get on the podium which gives us the right ambitions to finish the season the best we can. I am confident for tomorrow’s race, although we will have to deal with another qualifying first. Either way we will do our best.”

The European series will be back in action tomorrow morning at 9.40 am for the second qualifying session, while Race 2 will start at 4.10 pm, always over a distance of 30′ plus one lap to complete.