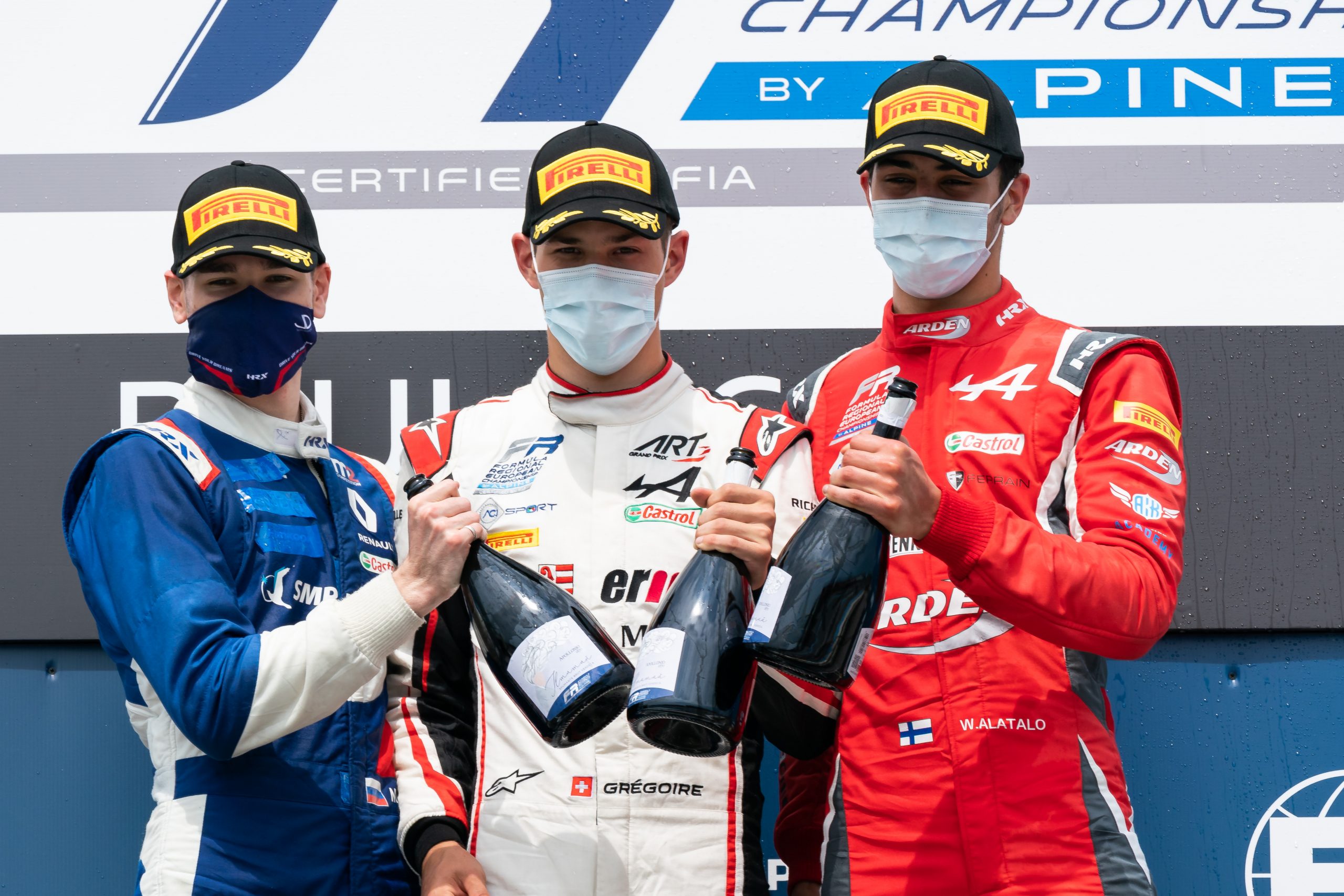 In Race 2 Grégoire Saucy (ART Grand Prix) is in pole position, while on his side is his first opponent on the Circuit Paul Ricard, Hadrien David (R-ace GP). In the second row are the two fastest Rookies in the start of the season, Gabriele Minì (ART Grand Prix) and Isack Hadjar (R-ace GP). In row 3 we find the F3 driver, the Russian Mikhael Belov (JD Motorsport), and at his side a fast William Alatalo (Arden). Behind the two, the Italian couple Andrea Rosso (FA Racing) and Pietro Delli Guanti (Monolite Racing), while to close the top ten on the grid are Patrick Pasma (KIC Motorsport) and Zane Maloney (R-ace GP). 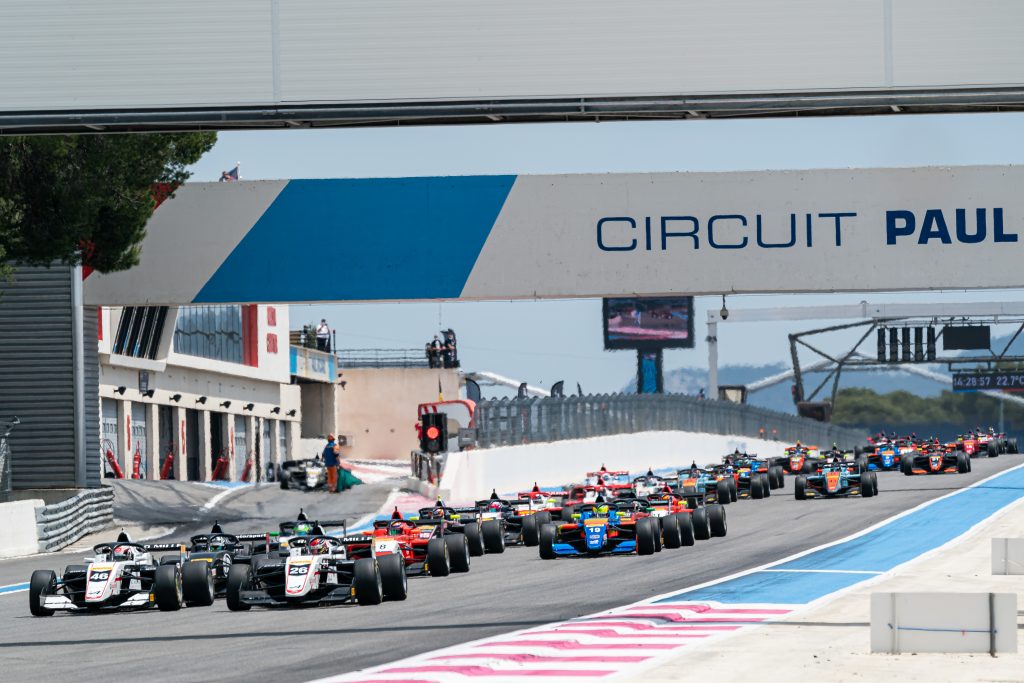 Unfortunately, in the formation lap David makes a mistake and stalls, the group passes all by and he is then obliged to start from the pit lane.

At the start, Saucy is not perfect, while Minì has an amazing leap and is quickly side to side with his teammate, but doesn’t just quite manage to overtake. Behind the Hadjar has a slow start, so Belov and Alatalo manage to pass and conquer respectively the third and fourth position, while the French driver of R-ace GP ends up fifth.

Behind, Rosso is in sixth position, in front of Pasma, who in the first lap is attacked and overtaken by Maloney, thanks to a great move of the driver from Barbados. 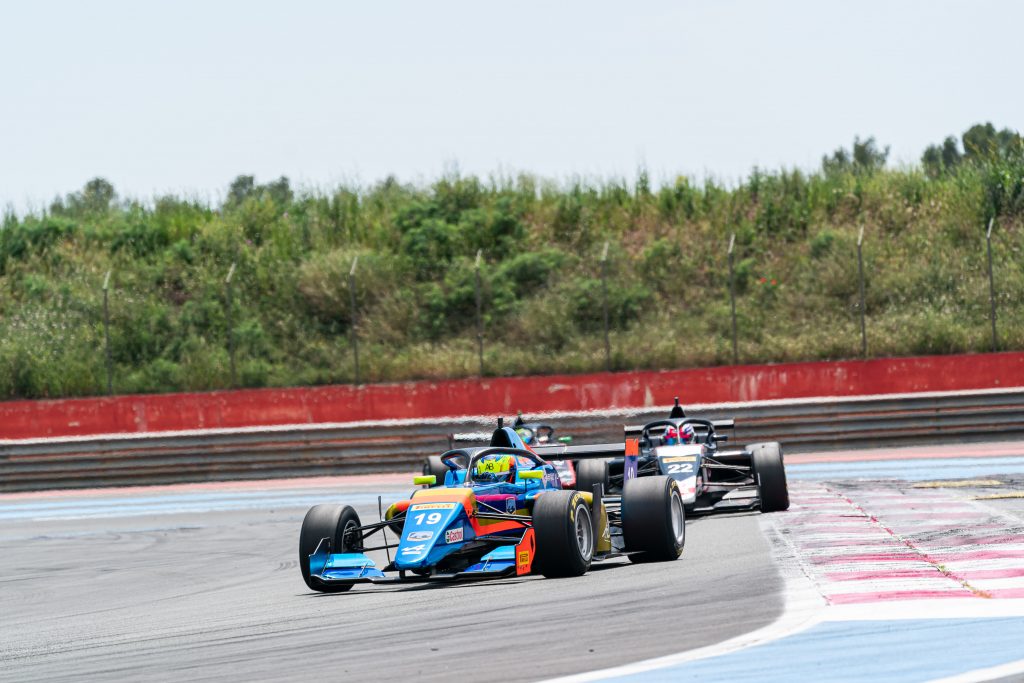 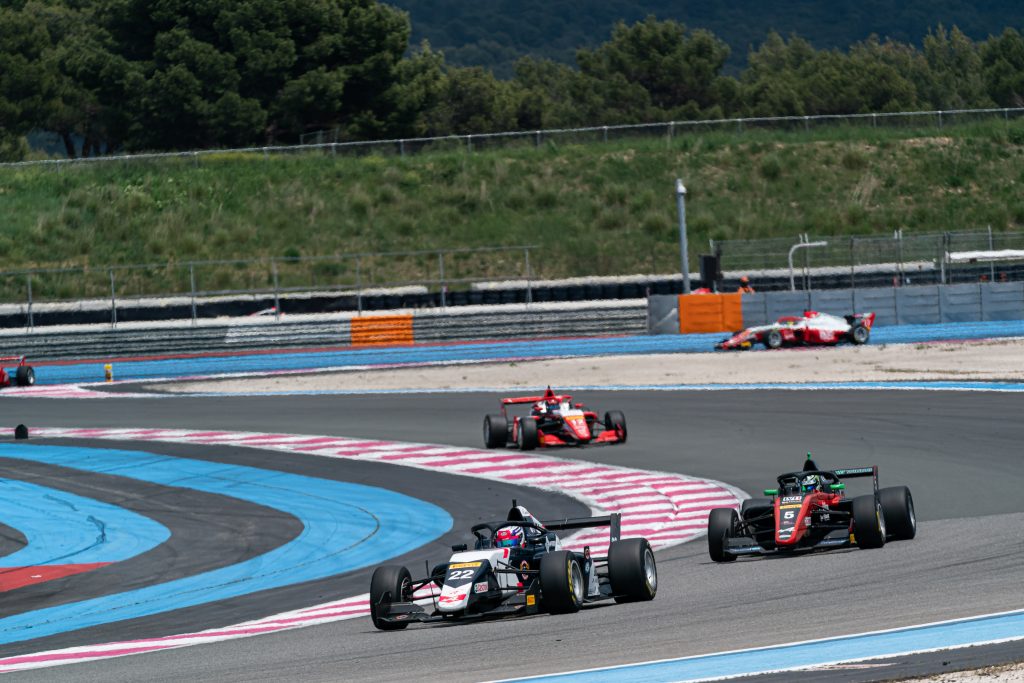 Soon, unfortunately, Minì slows down and loses positions until he exits the track in the pit lane with technical problems to the engine.

The race sees an amazing battle between Hadjar and Alatalo, the first trying to conquer back what he lost at the start, and driving at his best with great moves, but with the Arden driver always being completely focused and making no mistake till the end of the race. 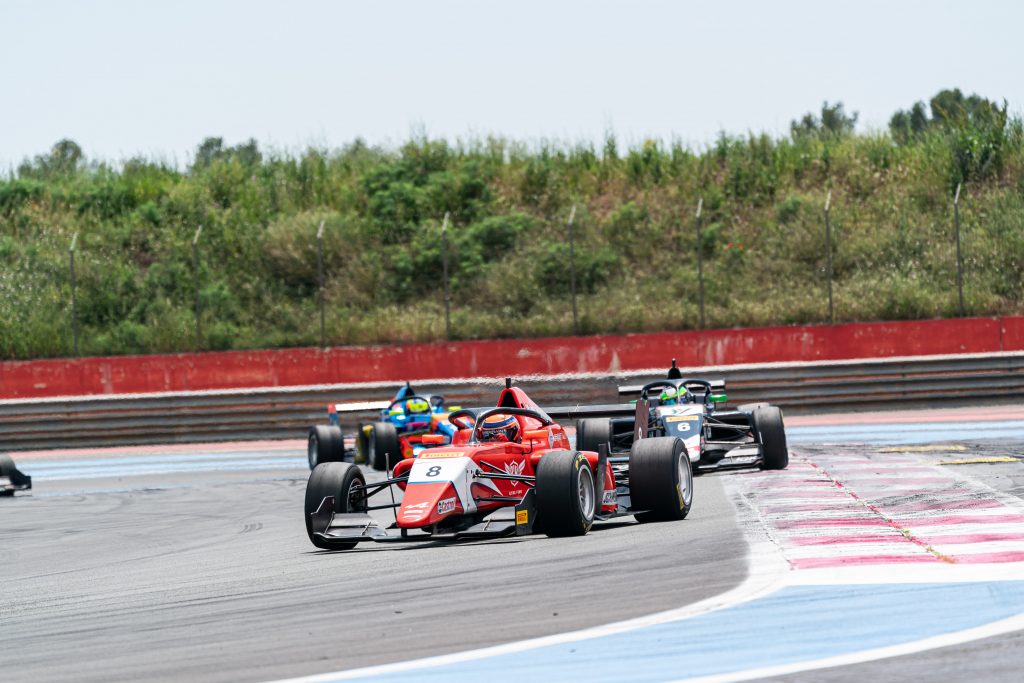 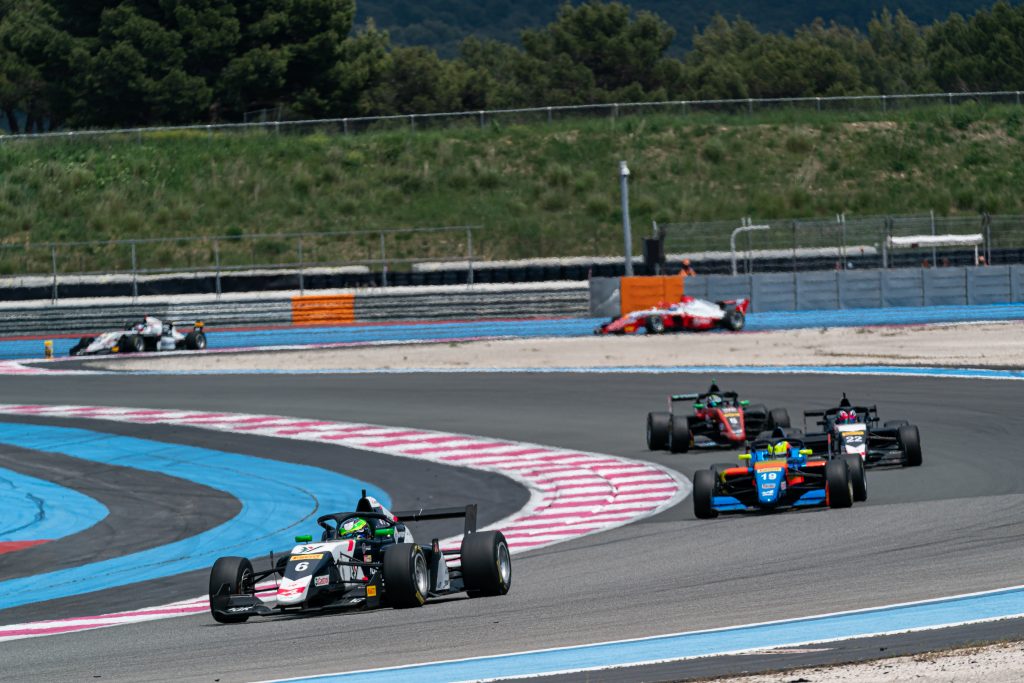 In the meantime, a huge recovery by David takes place, with the French driver gaining quickly positions one after the other and already 19th from last after only ten minutes of race. His will be an extraordinary race that will bring him up to the final ninth position, 26 positions up, with just the drop of one position declared by Race Direction due to a too optimistic maneuver causing a collision with Tomas Ten Brinke in the last lap.

In the battle between Alex Quinn (Arden), in tenth position, and Paul Aron (Prema Powerteam) in eleventh, it is the Estonian who makes a mistake and hits the car of the English driver who spins and loses a great number of positions. Aron will be penalized with 10 seconds added to the total race time, which will finally relegate him down to the 26th position.

In the last laps, an accident by Nicola Marinangeli (Arden) requires the entry of the safety car for one lap, so all drivers have the chance with a launched restart and one lap to gain more positions. One of these is David who overtakes Dino Beganovic (Prema Powerteam) first, and then he is very aggressive and overtakes Ten Brinke but, as already anticipated, this will overtake will be cancelled with the drop of one position for the French driver.

Finally, Saucy wins with practically no one able to really compete with him. Behind Belov, then Alatalo, Hadjar, first of the Rookies, Rosso, Maloney, Pasma, Vidales, David and Ten Brinke, whose positions will be sapped after the penalty to the French, and Beganovic, eleventh but gaining one point thanks to the fact that Beloc does not participate to the championship general standings. 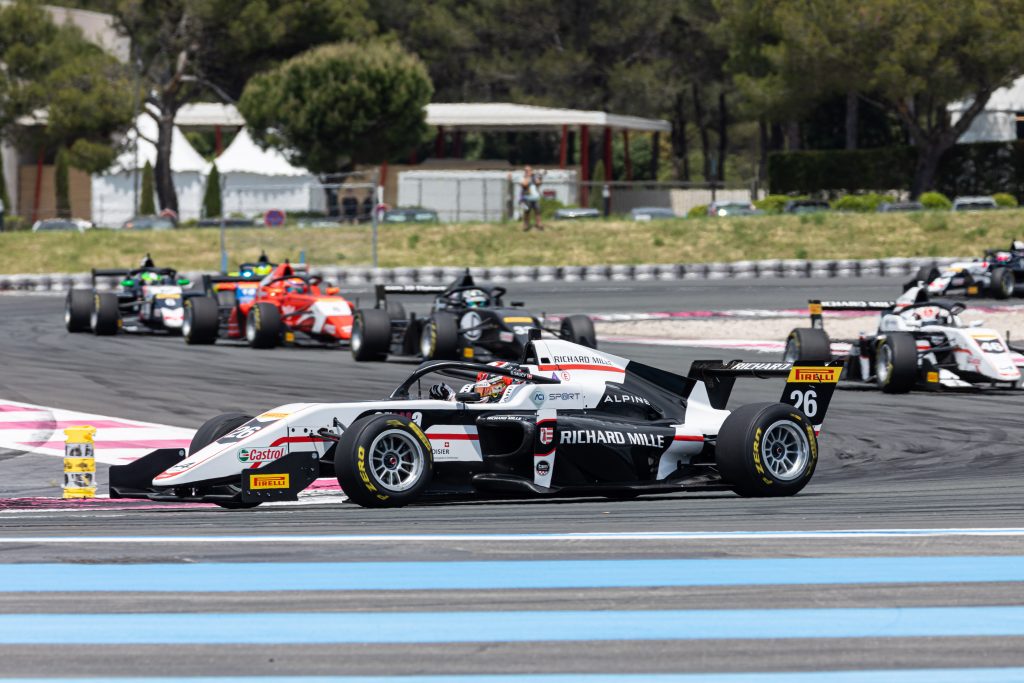 Saucy: “I am really happy and here I was the fastest. This demonstrates that the issue with my car yesterday and consequent disqualification had nothing to to with my great performance. We have worked hard with the team and all the people around me before the season and these are the results. Evidently I aim to win the Championship.”

Belov: “I am pleased and had fun this weekend. The car was good even if not totally perfect to be first but it has been a great experience.”

Alatalo: “After a tough start of the season with the team, finally we have found the right direction and definitely this is a great result. It has been hard to keep my position due to the fact that our speed is not yet 100%, but we are almost there.”