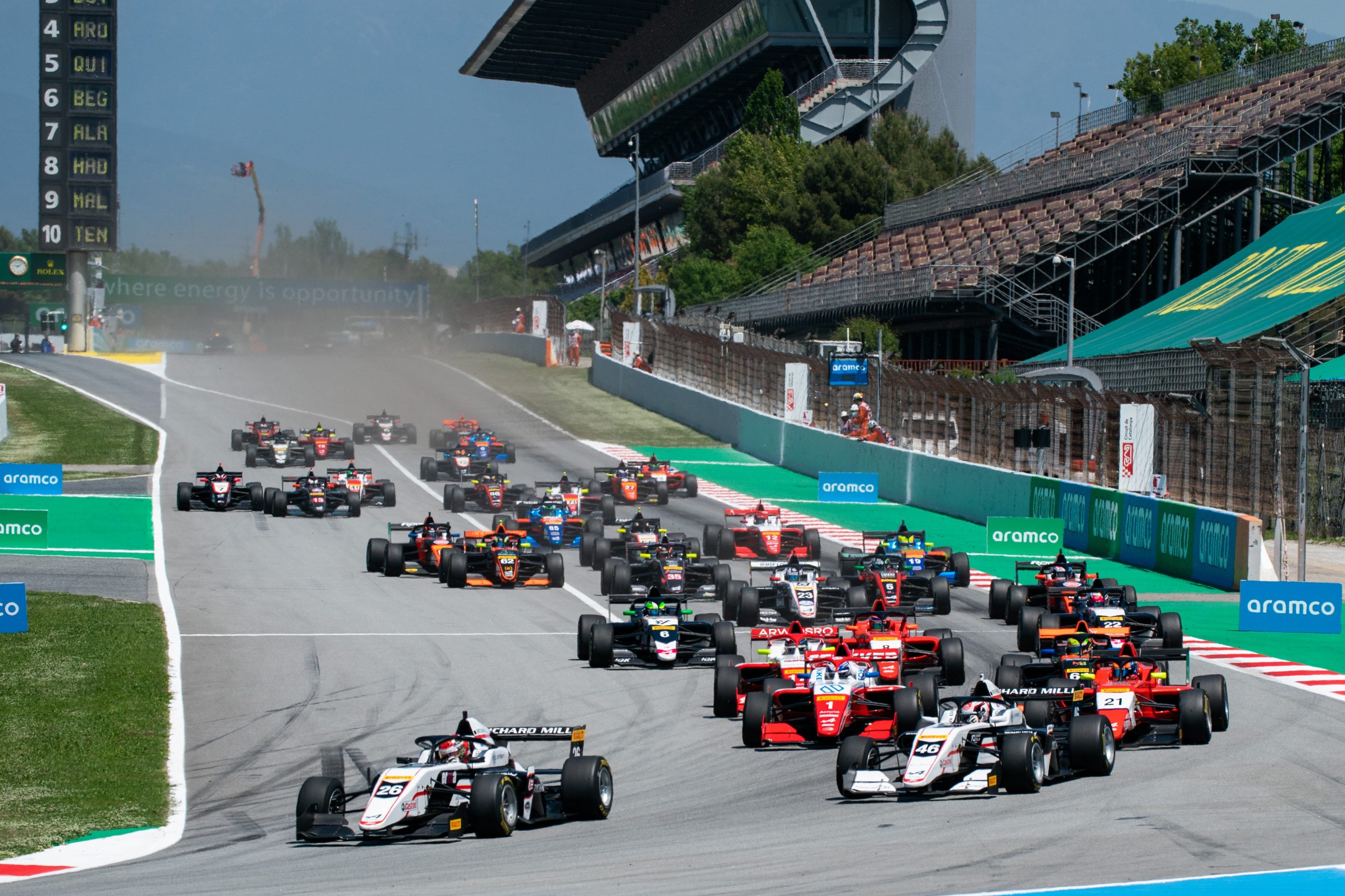 After the amazing results since the start of the year, with the Swiss Grégoire Saucy always in the first position in any test or qualifying session on the Circuit de Barcelona Catalunya, it was expectable that the driver of ART Grand Prix, starting from pole position in Race 1, would have been the fastest and unbeatable car on track. 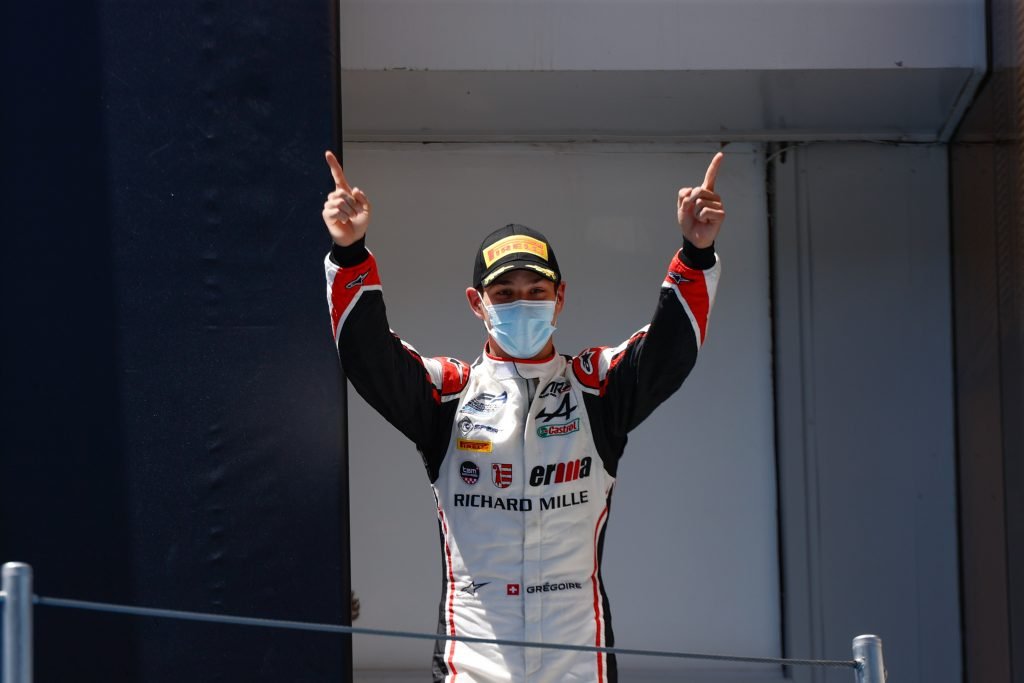 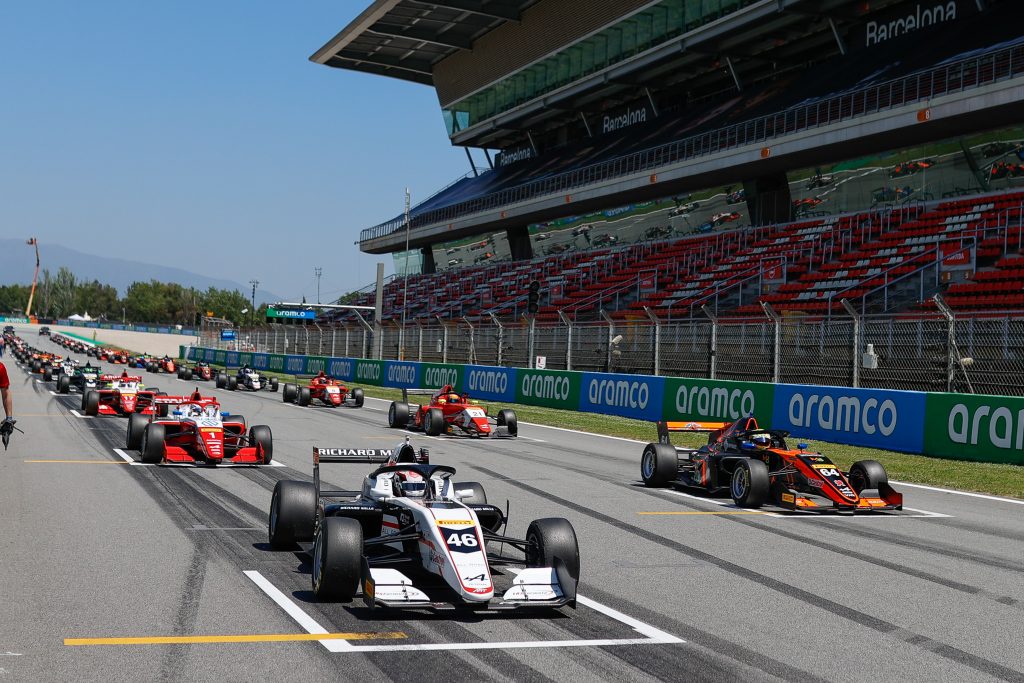 At the start, the only moment when the leadership of the Swiss driver is for a moment at risk is when Gabriele Minì starts better and the two teammates are almost side by side, but then having the Italian maturely accepting to keep his second position. Behind, a great move by Paul Aron gaining one position moving to third, while Alex Quinn (Arden Motorsport) literally jumps ahead of Mari Boya (Van Amersfoort Racing) at the start and for a moment puts the “nose” of his car also in front of Aron. 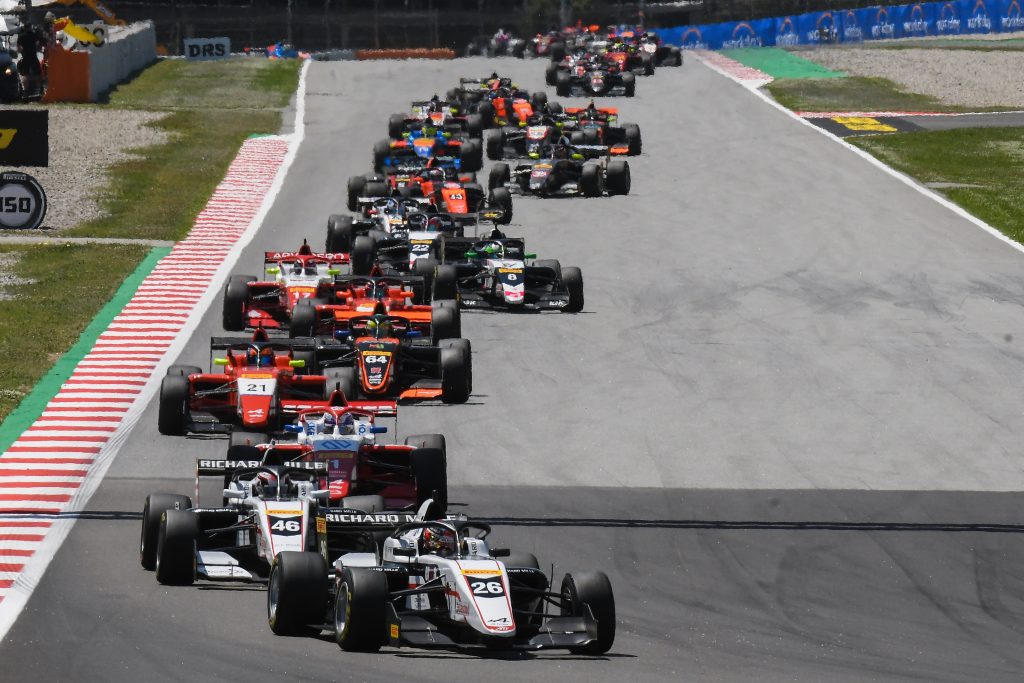 Just after a few turns the safety car (Alpine A110 with the same engine as the Formula Alpine) is deployed due to Nicola Marinangeli (Arden Motorsport) hitting Kas Haverkort (MP Motorsport) and both drivers going off track and ending their race. At the same time David Vidales (Prema Powerteam) and Gabriel Bortoleto (FA Racing) come to contact, with the Spanish going off track while the Brazilian is able to continue his race.

Marinangeli’s car hits the side protections and more than 10 minutes are required to reposition them in the correct way to ensure maximum safety, so in the meantime, the safety car is kept on track. 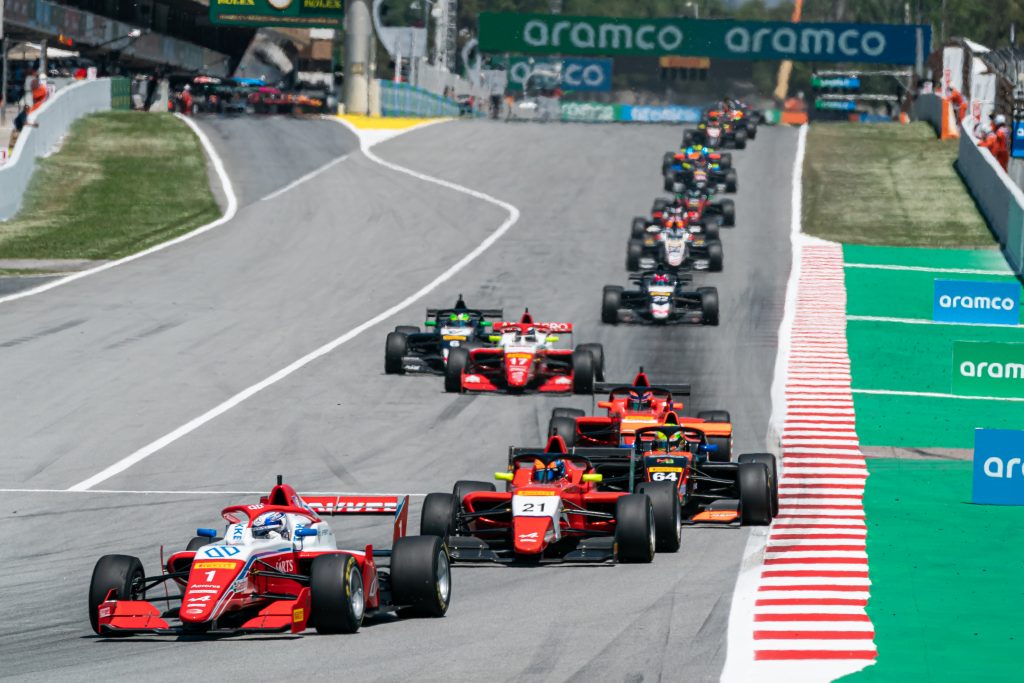 After a couple of laps, a fantastic move comes from Ten Brinke who attacks his teammate Maloney and overtakes him, the latter going for a moment off track and back on track with dirty tires, permitting Pasma to take advantage and also conquer the position from the driver of Barbados.

In the meantime, Saucy has gained an advantage of almost 2 seconds on Minì, while behind him the group is compact. A great battle takes place between Hadjar and Beganovic, the latter having to protect his 7th position from the French driver, who finally manages to pass with an amazing external overtake. 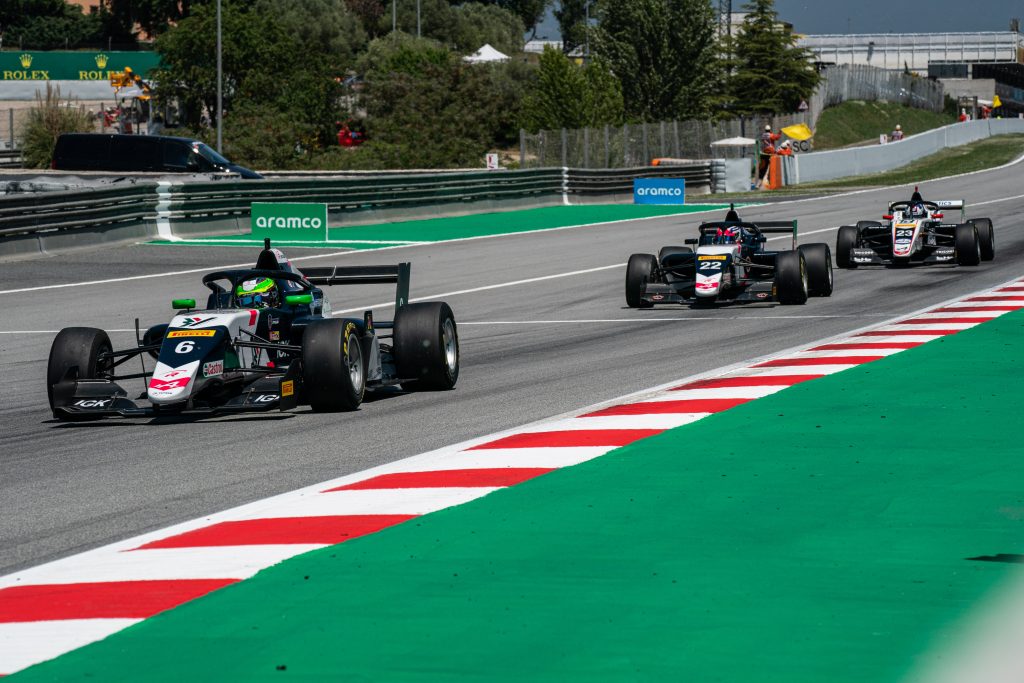 The yellow flag is out at turn 1 with Alessandro Famularo (G4 Racing) stopping at the side of the track. With such a situation, Quinn attacks Aron on the straight and is side by side with the Estonian, but finally has to back off when reaching the yellow flag area.

In the battle for 9th position between Colapinto, Beganovic and Maloney, the first two drivers come to contact and go out in the gravel, managing somehow to reach the track again, but losing many positions, and with the Argentinian driver damaging a suspension and so ending his race.

The safety car enters the track and brings the drivers to the end of the race. 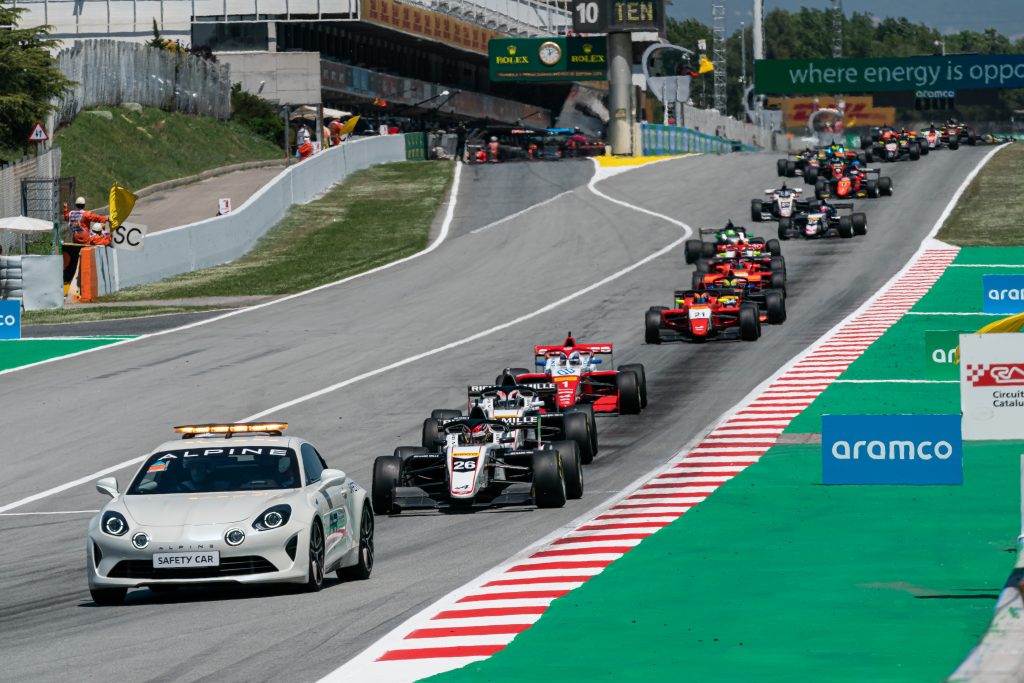 An amazing race for Hadrien David (R-ace GP) starting last due to engine problems in QP1, and finally ending 12th. 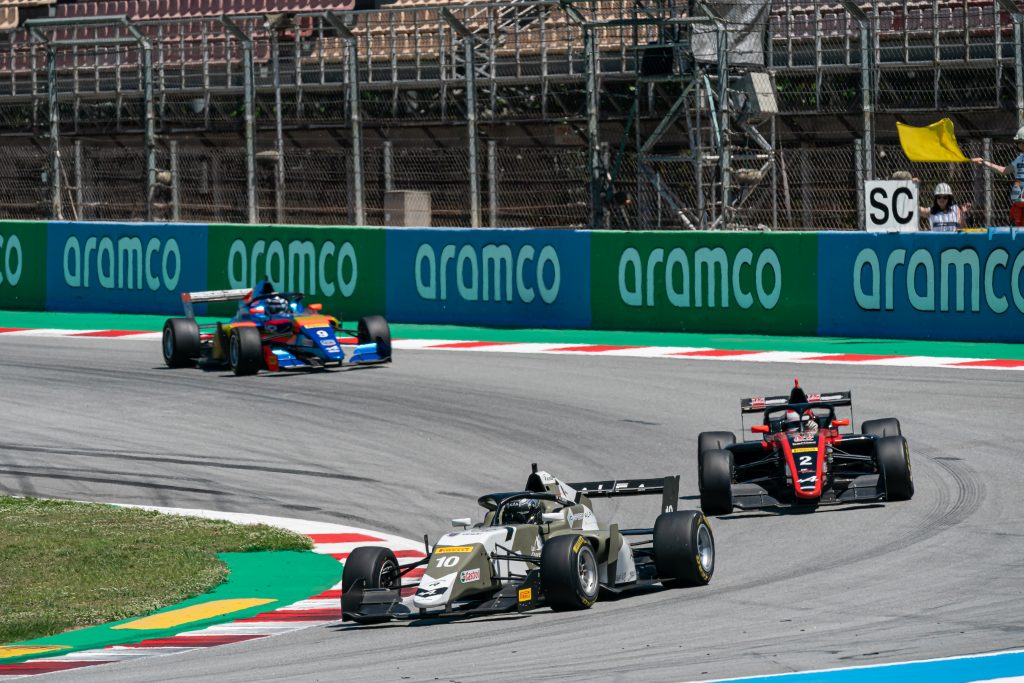 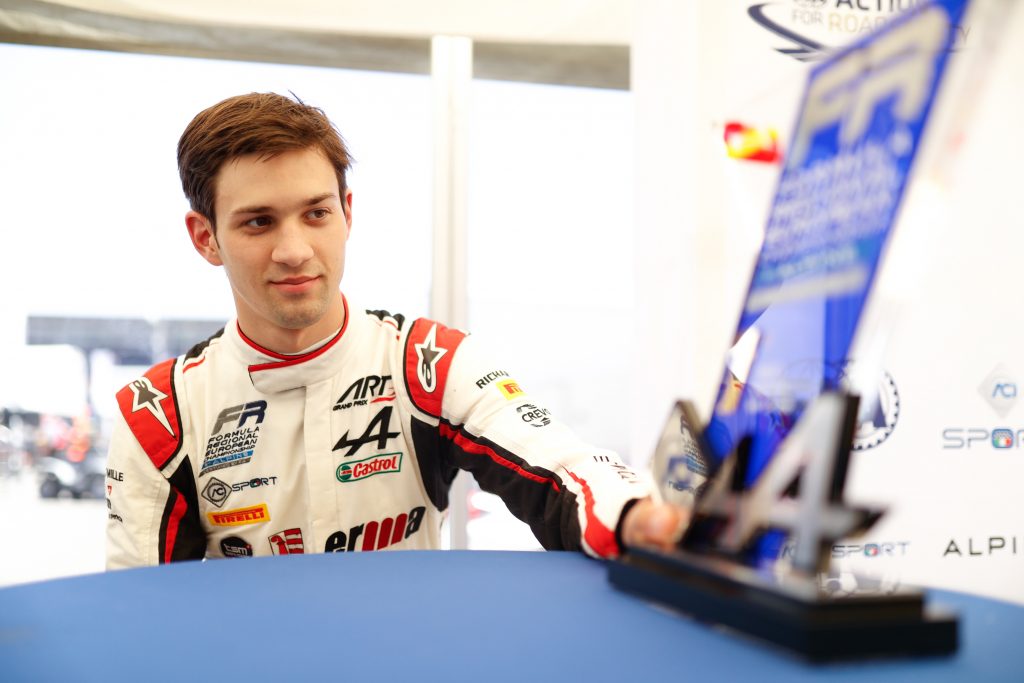 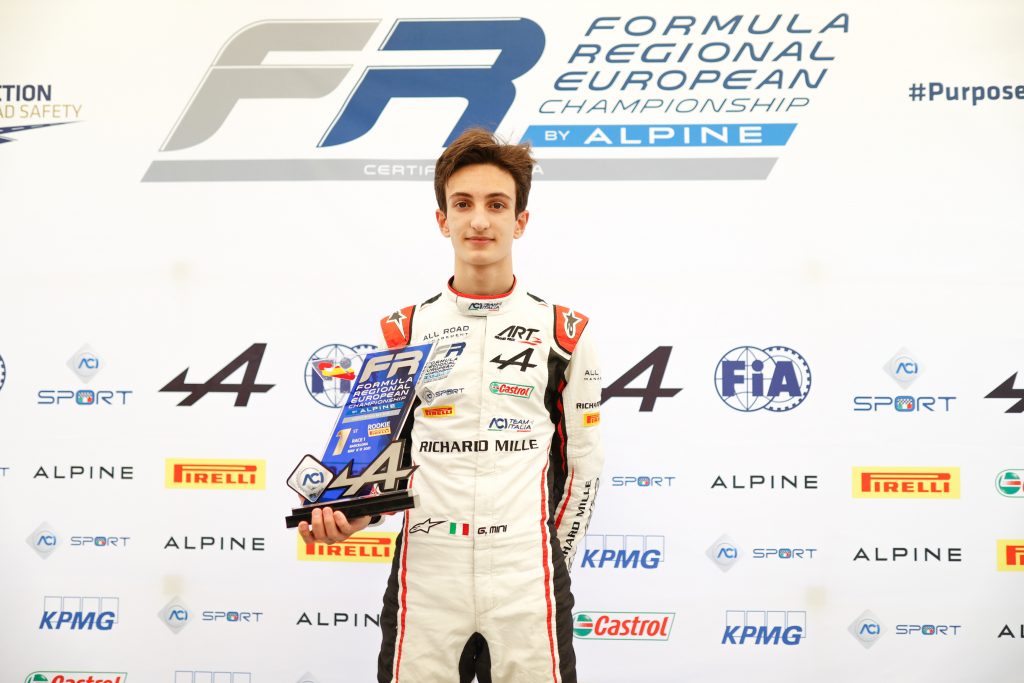 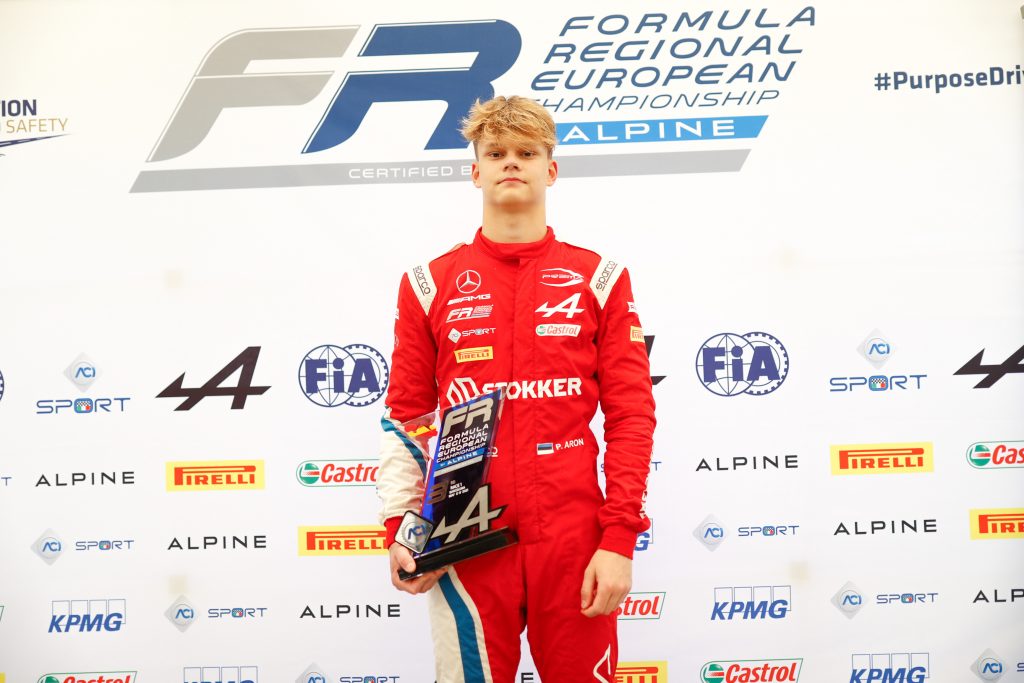 Race 2 tomorrow will start at 10:50 (CEST) with Live Streaming on the official Youtube and Facebook channels of the series, which are also reachable from the official website: formularegionaleubyalpine.com