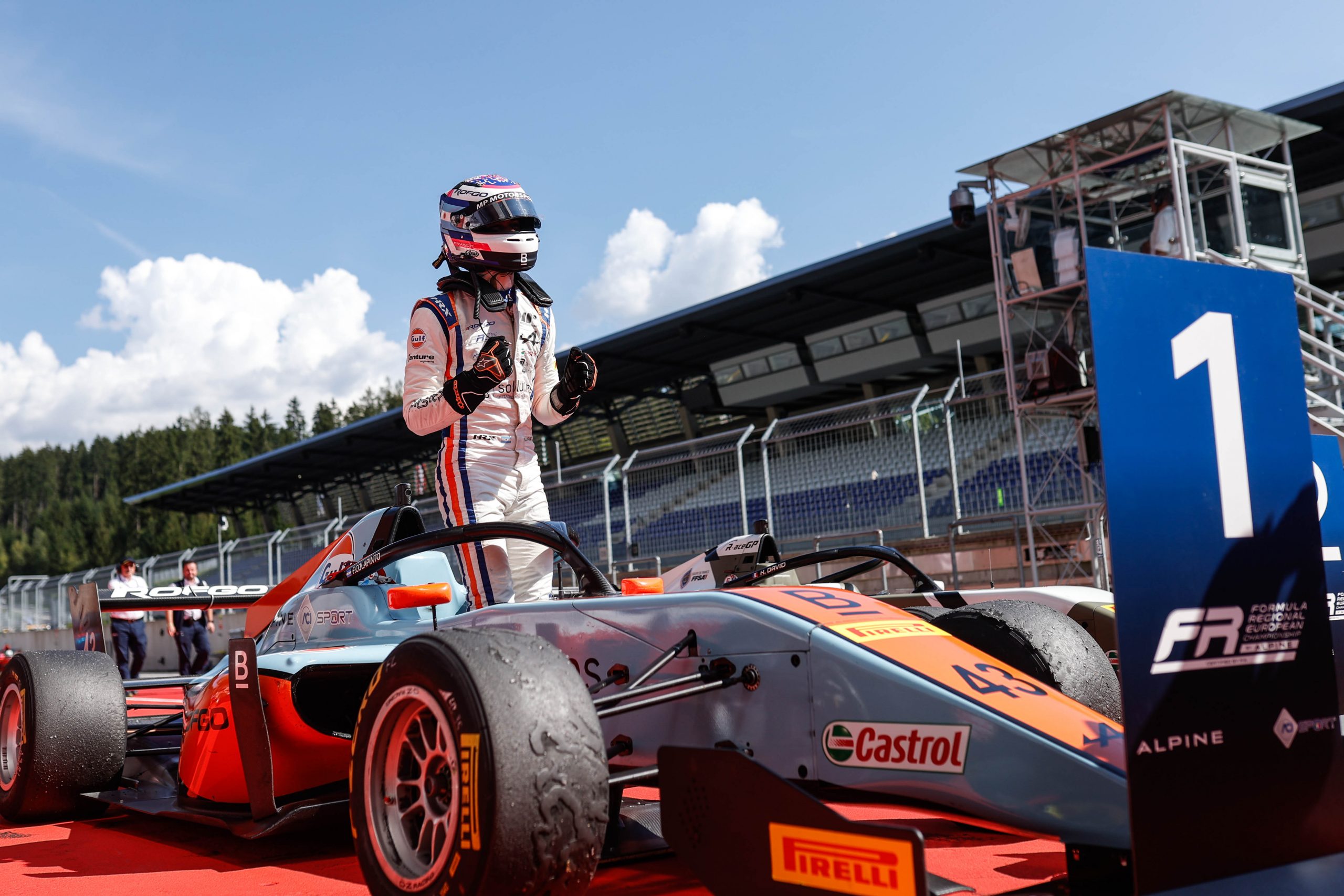 Franco Colapinto (MP Motorsport) starts from pole position and, although a not perfect start, manages with strength and decision to keep the lead from the attack of Hadrien David (R-ace GP). Behind the two Paul Aron (Prema Powerteam) is strongly attacked by Alex Quinn (Arden Motorsport), who moves up one position from fifth to fourth overtaking Gabriel Bortoleto (FA Racing), but does not manage to overtake the Estonian driver, who arrives to the first curve internally and manages to keep the position. Grègoire Saucy (ART Grand Prix) in the meantime manages to move up fifth also overtalking Bortoleto. Behind them, William Alatalo (Arden Motorsport), Zane Maloney (R-ace GP), Michael Belov (G4 Racing) follow ahead of Gabriele Minì (ART Grand Prix), Isack Hadjar (R-ace GP) and Dino Beganovic (Prema Powerteam). 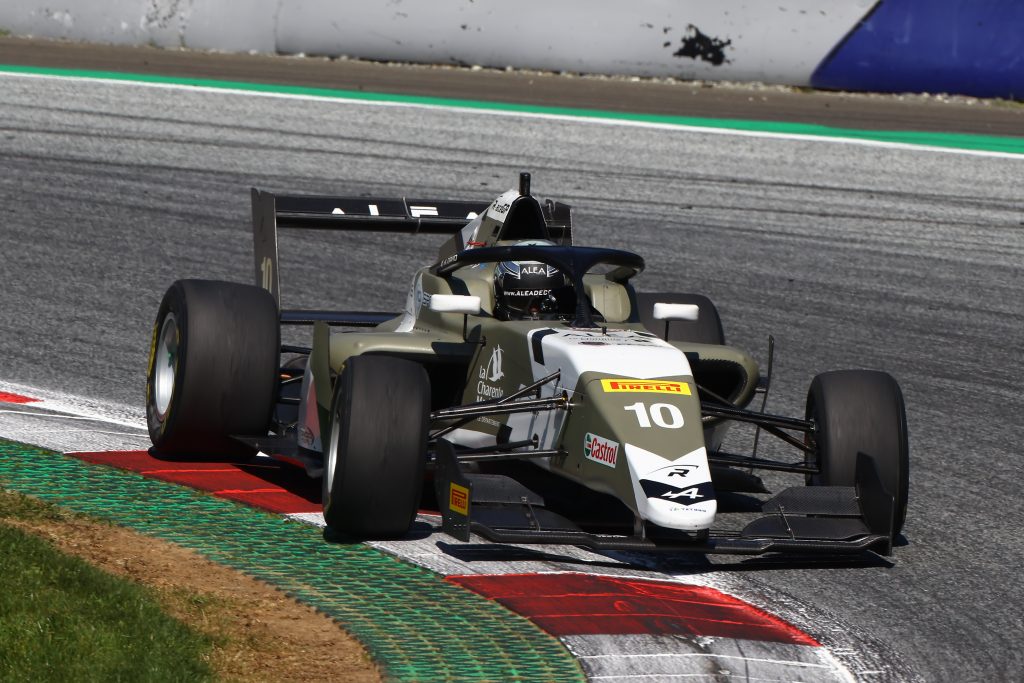 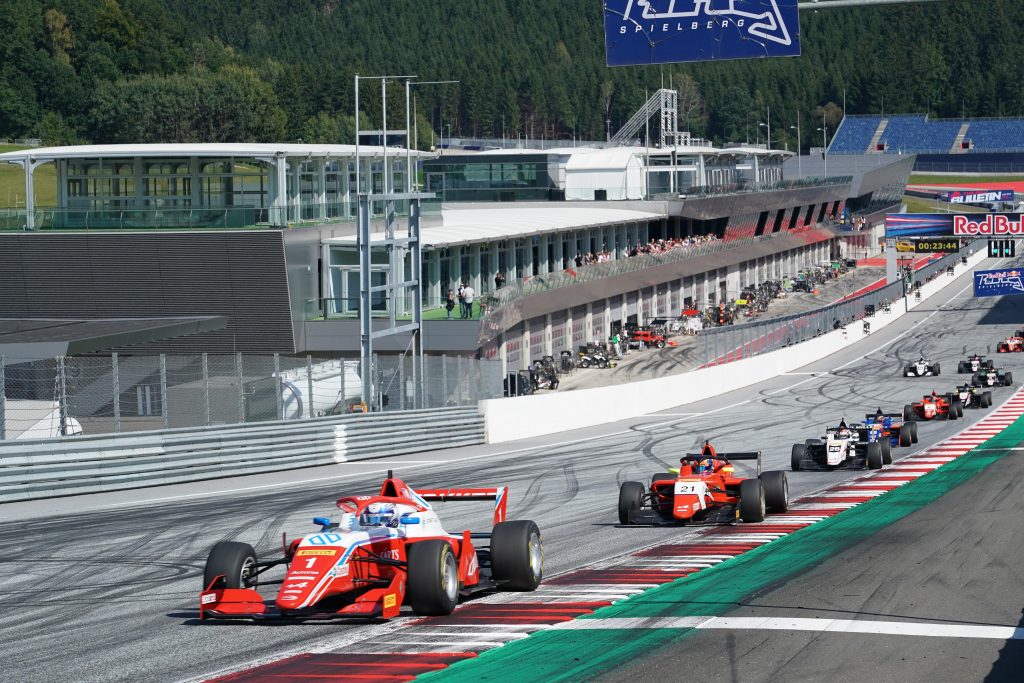 Still during the first lap, Léna Bulher (R-ace GP) crashes into Tommy Smith (JD Motorsport) and the two drivers are out from the race, also requiring the safety car to enter the track. Buhler will be penalized 3 positions on the starting grid tomorrow for this accident.

At the restart, Colapinto is very good and keeps the first position. Behind him are still David, Aron, Quinn, Saucy, Bortoleto, Alatalo and Belov.

The race continues with these drivers extremely close to one another, and at times getting so close to try and attack, but never fast enough actually to overtake. A great job is done by Belov, who actually manages to overtake Alatalo first and, later along the race, seven minutes to the end, also Bortoleto, making an amazing move with blocked wheels. Three minutes plus one lap to the end of the race Alexandre Bardinon (FA Racing) is out of the track in the gravel and the safety car is in once more, but this time it will bring the drivers to the end of the race as there is no more time for fast laps.

Colapinto obtains a fantastic win, the first for him and the team, in front of David, Aron, Quinn, Saucy, who limits the loss, a great Belov and an also very good Rookie, Bortoleto. After them Alatalo, Zane Maloney (R-ace GP) and Isack Hadjar. The latter will be finally penalized by two positions in the final standings due to going off track and using this situation two overtake Gabriele Minì (Prema Powerteam) and Zane Maloney (R-ace GP). Thanks to this Mari Boya (Van Amersfoort Racing) will conquer the tenth position.

Tomorrow QP2 will take place at 8.30, while Race 2 will start at 12.50 local time. Both will be shown live-streaming on the official Youtube and Facebook channels of the series, which are also reachable from the official website: formularegionaleubyalpine.com