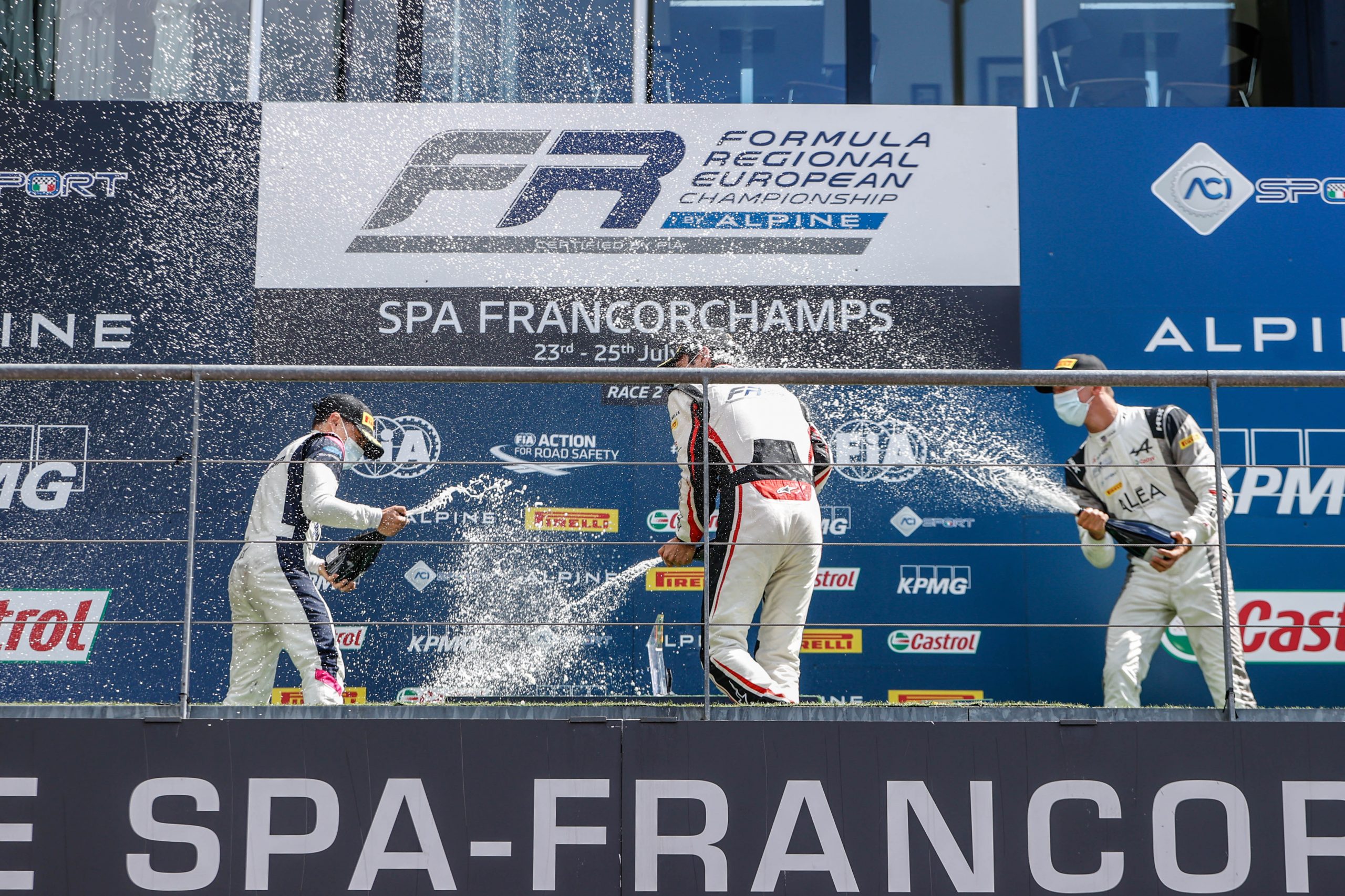 At the start Saucy is fast, but behind him Minì makes the best of the slipstream and overtakes his teammate, while Vidales is close to the first two. In the meantime, the track confirms it is good for overtaking, with Maloney taking the fourth position on David who has a weak start, while a furious Hadjar conquers the 11th position from Belov. 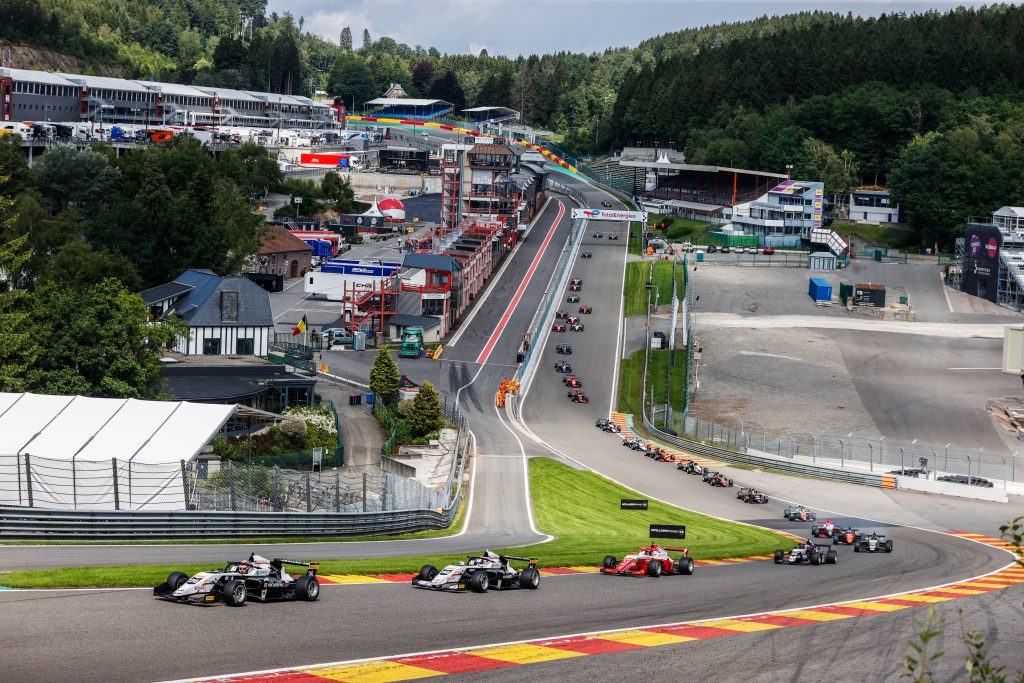 The battle is amazing between Minì and Saucy, trying more and more times to reconquer the first position, but with the Italian battling for every inch and in every corner to keep hold of the lead. In the meantime, Maloney overtakes Vidales, while Belov is faster than Hadjar and overtakes the French back. Finally, Saucy is back in the lead leaving Minì in second position, and Maloney taking advantage of the battle between the first two and closing the gap on them. 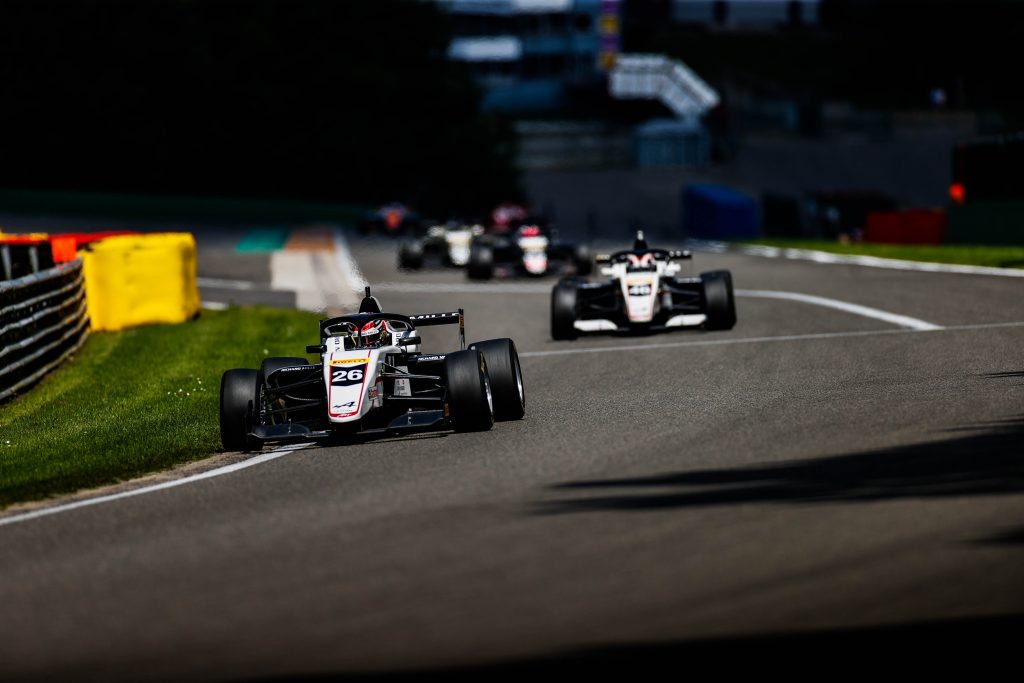 Franco Colapinto (MP Motorsport) is also doing a great race moving up 5 positions from the 10th at the start and actually manages to overtake Vidales 22 minutes plus one lap to the end of the race. Also, Gabriel Bortoleto (FA RAcing) is really effective in the first laps and gains six positions from 20th to 14th.

19 minutes to the end of the race and Pietro Delli Guanti (Monolite Motorsport) crashes with Tommy Smith (JD Motorsport), so their race ends and the safety car enters the track. At the restart, Saucy is perfect, while Minì is immediately attacked by Maloney, and in the tentative move to protect the position, the Italian is also passed by David, in an amazing show of battles and overtakes. Behind them, another group of drivers is close to one another trying to conquer the fifth position: Colapinto, Vidales and Havenkort. 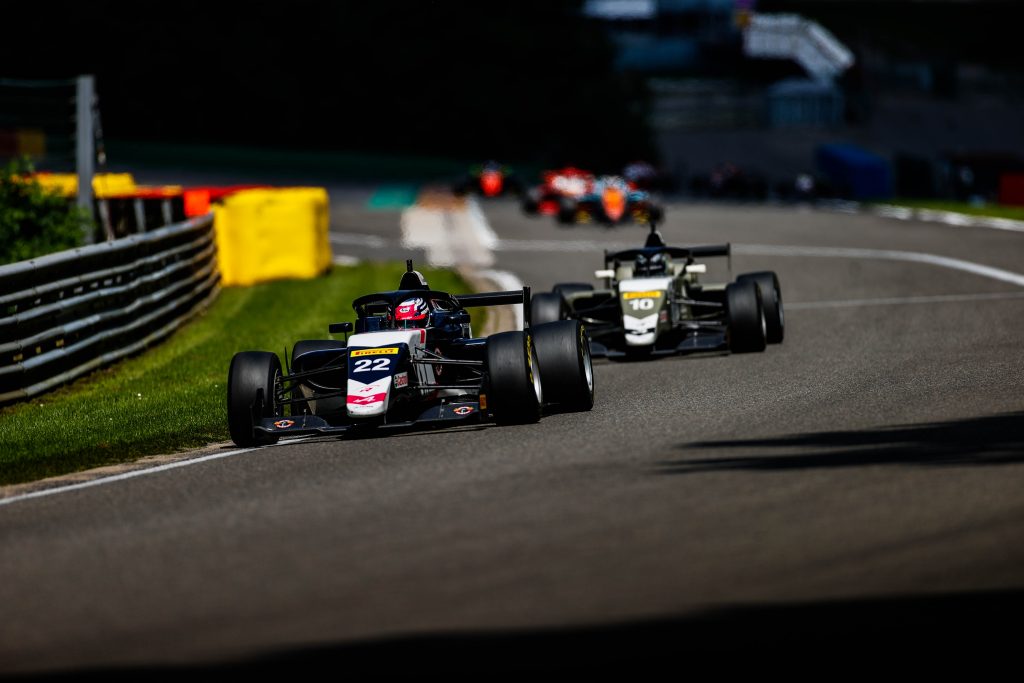 Maloney manages to get close to Saucy at a certain moment, by the Swiss is apparently only cooling down his tyres and soon increases his advantage on the strong driver from Barbados.

At 9’40” to the end of the race a great move from Vidales permits him to overtake Colapinto. Unfortunately, Vidales in involved soon after in an accident with his teammate Paul Aron (Prema Powerteam) and is out of the race, while the Estonian driver loses some positions falling down to 10th, but manages to continue his race, and actually gain back the ninth position overtaking Hadjar, who has just before conquer the position on Dexter Patterson (Monolite Motorsport), the British driver obtaining a great performance despite almost zero experience in this series.

The first three drivers, Saucy, Maloney and David are in only 1.1 seconds, while Belov is the quickest on track.

Another battle sees William Alatalo (Arden Motorsport) conquer the 10th position from Hadjar, but the battle does not end as the two drivers are involved in a continuous challenge also with Havenkort. At this point, the three drivers who have been gaining more positions since the start are Hadjar and Alatalo, up 7, and Belov, up 6.

The race ends with Saucy conquering another win, finally losing only 4 points of advantage on his first follower in the championship, David, finally third in race 2 behind Maloney. Minì will be fourth and first of the Rookies, after a great race and really strong character in the battles at the front, but somehow paying more than deserved his weak restart behind the safety car.

After the meeting in Spa-Francorchamps Grègoire Saucy leads with 189 points, ahead of Hadrien David with 129 points, and Zane Maloney who reaches 124 points.

In the Rookies category, Gabriele Minì leads with 109 points, ahead of Isack Hadjar with 101 and Mari Boya far back with 29 points.

Finally, in the teams’ standings, Art Grand Prix leads with 320 points, but R-ace GP is just behind with 317 points, ahead of Prema Powerteam with 166 points.

With the cancellation of the meeting in Nurburgring, the new dates and venue will be communicated in the coming weeks.