Spa-Francorchamps, Race 2: Saucy and what a show!!! 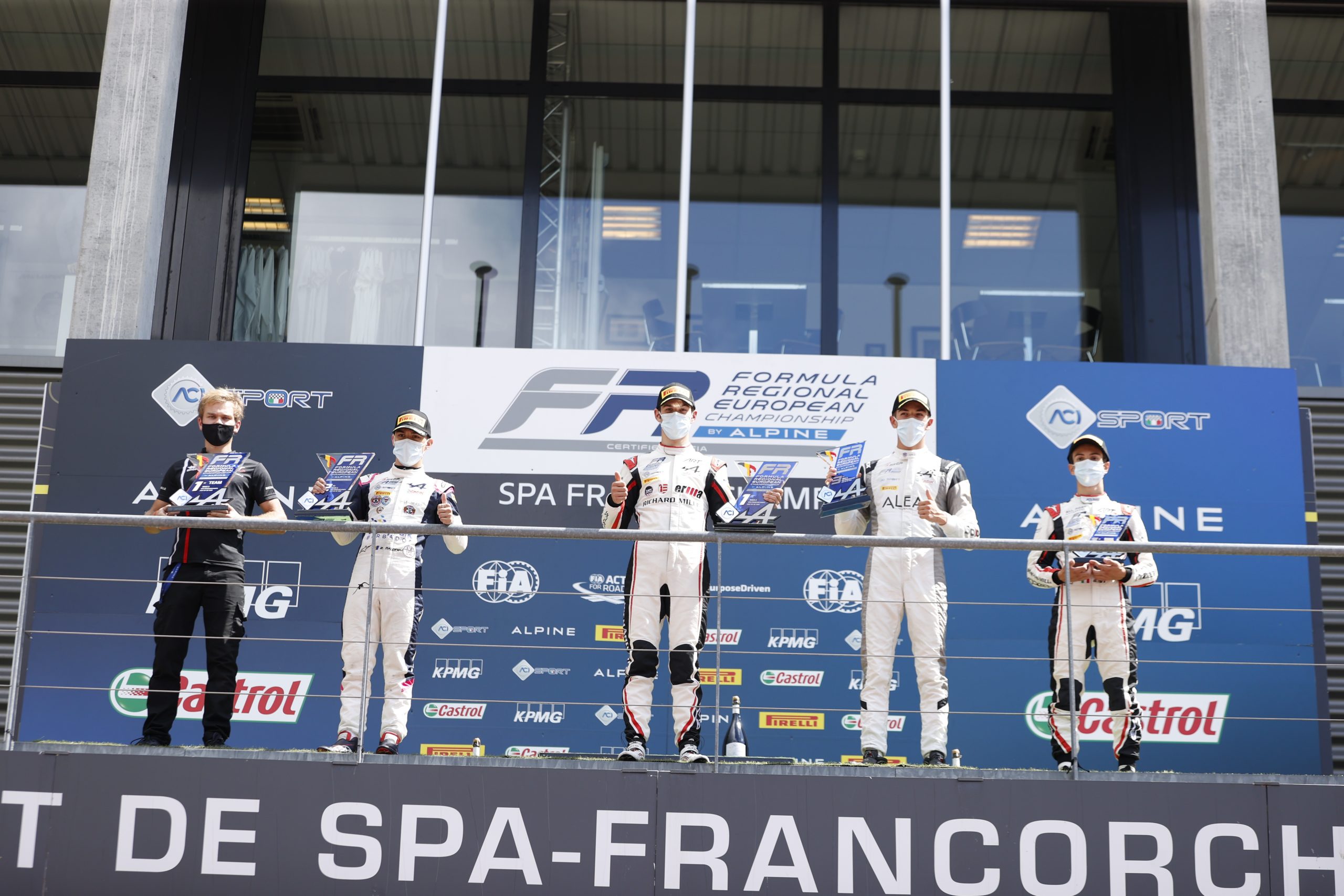 Race 2 in Spa-Francorchamps expresses the best driving one could possibly see, with so many overtakes, but almost no incidents, and so much talent and maturity by many drivers, making this a real show!

It is finally Grègoire Saucy (ART Grand Prix) from pole position to win the race, but not before having to battle first with his teammate, the 16 years old Rookie Gabriele Minì, who actually manages to overtake with a great move the Swiss driver at the start. Finally, after many attempts, Saucy manages to gain the first position back, but he will have to defend it from an amazing Zane Maloney (R-ace GP), who will be able, with a fantastic race, to conquer the second position on the podium after starting from P5. In the third position is finally an always very fast and effective Hadrien David (R-ace GP), who does not have a perfect start, losing P4 on Maloney, but manages to overtake David Vidales (Prema Powerteam), out of the race due to an accident with his teammate Paul Aron, and Gabriele Minì, finally fourth and first of the Rookies.

The safety car will enter on track after the accident between Nicola Marinangeli (Arden Motorsport) and Tommy Smith (JD Motorsport), and at the restart Minì, second in that moment, will lose two positions from Maloney and David.

A great race also by the winner of Race 1, Michael Belov (G4 Racing), up six positions from 11th to final 5th. Behind him Franco Colapinto (MP Motorsport), up 5 positions, a fantastic Dexter Patterson (Monolite Racing), seventh and second of the Rookies at his second race in the series and coming directly from the F4 experience. Paul Aron (Prema Powerteam) is eighth, while Isack Hadjar (R-ace GP) is ninth, up seven positions from 16, just as William Alatalo (Arden Motorsport), finally tenth from the 17th position on the grid.

“It is really nice to race here and the battle with Gabriele first and Maloney after has been great. I enjoyed every moment and this win is great also for the championship. At the start on this track, you do not only have to look in front but also at the rear as the straight permits your rival to use the slipstream and attack you. In Race 1 I have started very far behind for a mistake in the strategy we used for qualifying, but finally also in such race from 24 to 8th I have managed to limit the damage”, comments the winner and championship leader with now additional points of advantage on Hadrien David, second in the general standings.

“I am evidently much more satisfied than yesterday”, comments Zane Maloney. “Race was great, I had the pace and a lot of fun. I tried also to conquer the final win, but Grègoire drove well. Still, I think with some more laps there was the potential to attack him”.

“Great weekend, both races on the podium, so my best result in this season”, comments Hadrien David. “I had a bad start so Zane was able to overtake me, and finally I had some problems with tyre wear so I had to control, and I consider this third position very positive”.

It is possible to watch again this race and the racing weekend in Circuit de Spa-Francorchamps on the official website: formularegionaleubyalpine.com and social media pages: