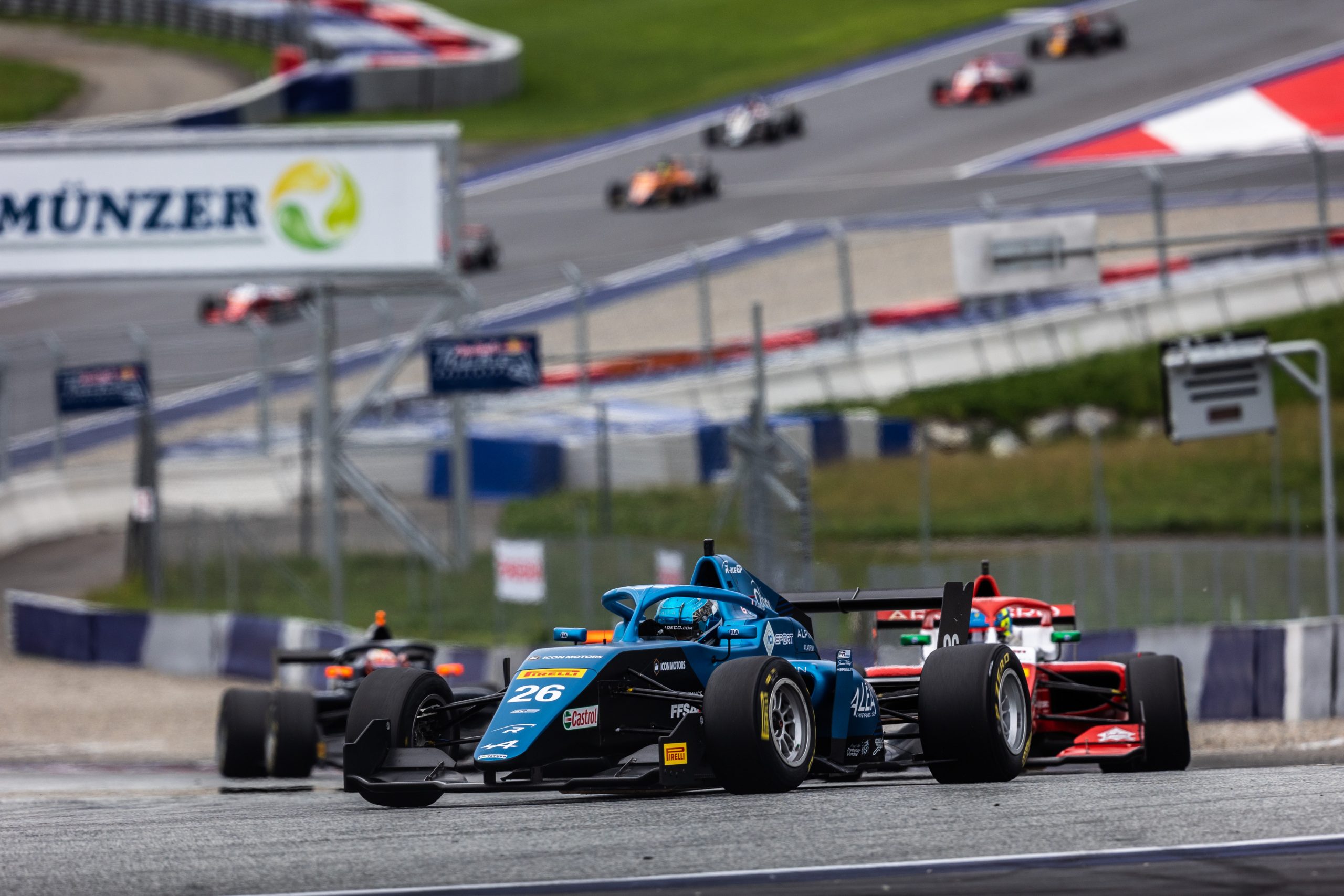 The Formula Regional European Championship by Alpine ends its eighth round of the season at Red Bull Ring with Hadrien David‘s victory in Race 2. The young driver of the R-ace GP team drove a perfect race after starting from pole, and kept the lead from start to finish.

Behind the French driver, who celebrated his third win of the season in Austria, Prema Racing‘s Dino Beganovic took the second step of the podium, keeping the place of honour until the end thanks to his steady pace. Another important result for the Swede, who returns home from Styria with an improved leadership in the series after yesterday’s third place, given the transparency in the standings of Pierre-Louis Chovet. Joshua Dufek (Van Amersfoort Racing) did well once again, taking his second consecutive first place among the rookies in addition to celebrating the bronze medal.

Gabriele Minì (ART Grand Prix) was the author of an excellent start in which he was able to make two good overtakes, taking fifth position before the entry of the safety car due to his teammate Esteban Masson going off the track after a contact with Roman Bilinski (Trident Motorsport), this latter also being forced to retire. At the restart the Sicilian driver moved up to fourth place, a position he held until the chequered flag. Noteworthy also Gabriel Bortoleto‘s performance (R-ace GP) as he managed to take fifth place ahead of Joshua Durksen (Arden Motorsport) and Chovet, who gave an excellent weekend to the RPM team, with which he made his debut in Austria, after yesterday’s third place.

Eduardo Barrichello (Arden Motorsport) after battling for the top 10 during a good part of the race managed to score some points thanks to eighth place, ahead of the two Trident Motorsport cars of Tim Tramnitz and Leonardo Fornaroli.

Two more neutralisations for the off-track of the two MP Motorsport cars of Mary Boya and Dilano van’t Hoff while they were fighting for thirteenth place and in the final stages of the race, following the spin of Lorenzo Fluxa (R-ace GP) which brought the race to an end under safety car conditions.

“All our pole positions were turned into wins this year,” David said. “Unfortunately, we have not been consistent, but at the same time we have shown that we are fast and have a good pace, which remain our goals for the next two rounds. Today’s was a really good race, where I had a perfect car”.

“It was a really good day,”  Beganovic said. “Yesterday’s qualifying did not go as we had hoped, but today we did a good job, which allowed us to obtain important points for the standings and to consolidate our advantage over our competitors. We’ll see how the last two events go, for now all I can say is that these are two tracks where I really enjoy racing”.

“It’s the perfect conclusion to an exceptional weekend,” Dufek said, “we made the most of everything thanks to the excellent work of the whole team. I didn’t expect this result and I aim to repeat myself during the next round in Spain”.

The European series will be back in action for the second to last round of the season in Barcelona on the weekend of 15-16 October.