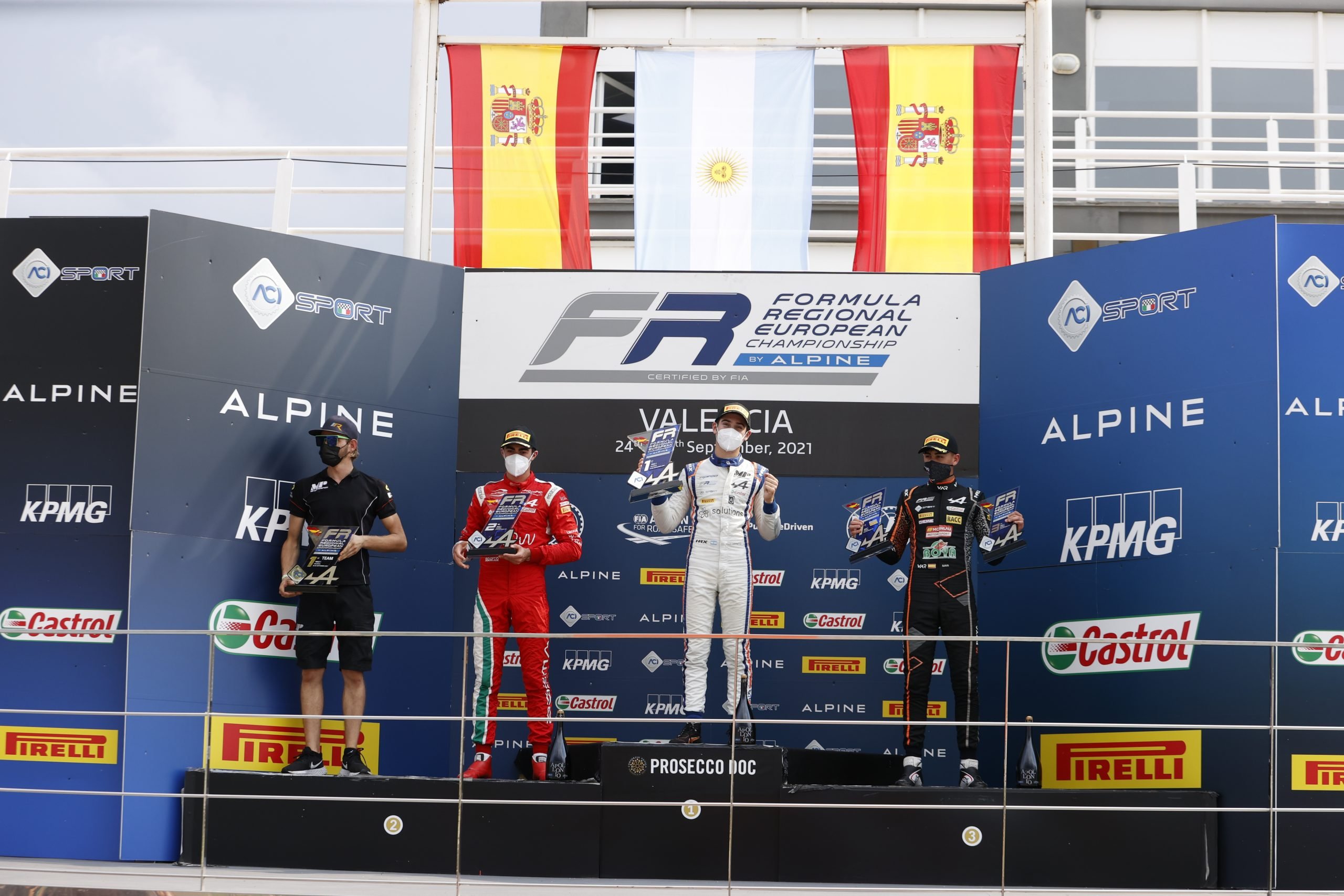 Franco Colapinto (MP Motorsport) from pole position on the grid is ahead almost all the 30 minutes plus one lap and wins Race 1 in Valencia. Behind him, a fantastic David Vidales (Prema Powerteam) attacks most of the time, and actually manages to overtake the Argentinian after turn one, but finally goes wide and the MP Driver is good in reconquering the lead. Amazing podium by the Rookie Mari Boya (Van Amersfoort Racing), finally third, just a little bit further back from the first two.

Paul Aron (Prema Powerteam) manages to overtake Michael Belov (G4 Racing) in the first lap taking advantage of the Russian trying himself to overtake Boya. Aron finally conquers the fourth position, with the Russian fifth, in front of Alex Quinn (Arden Motorsport). Seventh is Hadrien David (R-ace GP), able of gaining the position from his teammate Isack Hadjar, finally ninth, behind also the other R-ace GP driver, Zane Maloney, the best in gaining positions among the front drivers, and in fact finally eighth from P12 at the start. Tenth is Dino Beganovic (Prema Powerteam), who gains one position from Grègoire Saucy (ART Grand Prix).

The championship leader scores no points and loses four from his first rival David, even though the Swiss driver is still 74 points ahead in the championship, and needs “only” 26 points to be mathematically the winner of the title, with 125 points still to be assigned until the end of the season.

“I did not have a good start to be sincere, but I was good in constricting Vidales wide and reconquering P1. Then it was not an easy race due to the great heat. The car was moving around quite a lot, but finally the team did an amazing job and we managed to win”, said Colapinto at the end of the race.

“I tried to conquer P1, and actually managed to gain it, but finally I lost it again. I am really happy for the second final position and for the speed we demonstrated during the race. It was not easy to overtake as with this car once you get really close to the car in front, you actually lose much of the downforce”, said a satisfied Vidales.

“I am really happy for me and the team. We have been all season almost there, but then something was always missing. Now we have shown our potential. With this great heat the car was not as fast as in free practice, so we have some work to do, but we now the direction and tomorrow the track conditions should be very similar. Great to be on the podium as a Rookie, and I know it is difficult for VAR as we are three Rookie drivers”, said a very satisfied Boya.